Storms cause flooding in western Italy | Europe| News and current affairs from around the continent | DW | 05.11.2011

Storms cause flooding in western Italy 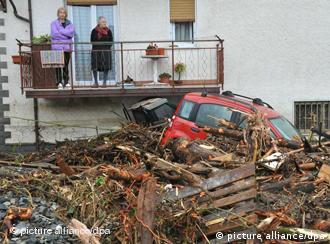 Floodwaters in western Italy left behind death and destruction

"It is evident that there was construction in areas where there should not have been," Berlusconi said.

Torrential rains lashed the Mediterranean port city of Genoa and the surrounding western Italian coastline on Friday and Saturday, triggering flash floods that broke the banks of two rivers and killed at least seven people, two of them children.

Raging waters uprooted trees, swept away cars and gutted low-lying homes and shops. "People should avoid bridges and streams and not sleep on ground floors or in areas that are easily flooded," said a local emergency official Renata Briano.

Highways in the region and Genoa's airport have been closed, while the city's streets are largely deserted after a driving ban came into force. Dozens of people have been evacuated from the hilly Piemont region to the north after mudslides threatened several communities.

It is the second disaster to hit the region after 10 people died in flooding that swept the sea coast near Genoa on October 27.

The region, known as Cinque Terra in the province of Liguria, is a popular tourist destination. Local residents said they had not finished digging out of the mud from last week's flood as the new storm hit.

Thailand braces itself as flood waters advance to key areas of the capital city. Relief efforts are underway but local aid workers say a lot still needs to be done. (04.11.2011)

Torrential rains in Italy have caused massive flooding and mudslides, killing at least nine people and cutting off several towns. Residents were shocked by how fast the storms came. (27.10.2011)

Massive floods have left nearly 500 people dead across Thailand, Cambodia and Vietnam. Authorities are stepping up efforts to reach victims of the unusually heavy monsoon rains. (10.10.2011)