A defensive error from Chile's Marcelo Diaz handed Germany a second international tournament win of the weekend. Gladbach's Lars Stindl was the man to profit, as Germany's ruthlessness decided the game. 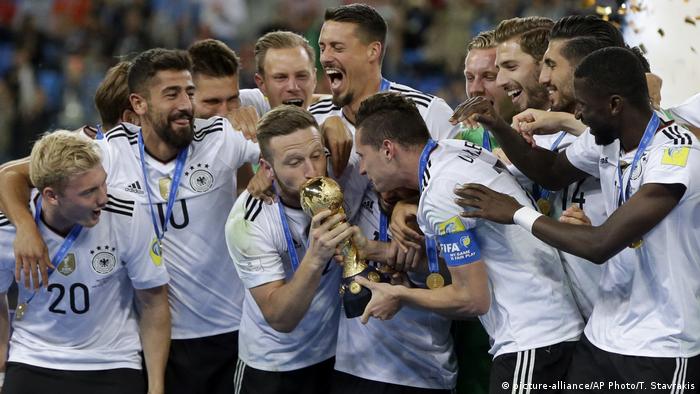 A first-half Lars Stindl effort that came completely against the run of play was enough to secure Germany a second tournament win of the weekend. After the European Championship success of their under 21 side, the senior team recovered from a shaky start to see off South American champions Chile, who will rue the major errors at both ends of the pitch that cost them the match.

Chile took the initiative from the off, often probing down the left in an attempt to isolate Joshua Kimmich against Alexis Sanchez. But it was through the center that they almost found the breakthrough after five minutes. Charles Aranguiz gathered the ball following some excellent interplay but was denied a shot at goal by an excellent lunging tackle from Antonio Rüdiger, before Marc-Andre ter Stegen blocked Arturo Vidal's follow up.

Vidal's influence on the game was palpable throughout and he fired a long range strike wide minutes later while the representatives of the country he plays in looked rattled, wasting the little possession they had. Eduardo Vargas was next to test ter Stegen after some sloppy play in the German midfield. 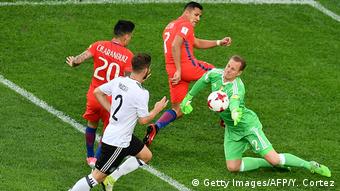 Chile wasted a string of chances

Alexis Sanchez then missed a golden chance for Chile after ter Stegen spilt another Vidal effort.  As if to prove their reputation for efficiency, Germany made their opponents pay with their first shot of the game, but it was a goal gifted to them by the South Americans.

Perhaps lulled in to a false sense of security by his side's dominance, Marcelo Diaz lingered on the ball for an eternity on the edge of his box, turning slowly and gracelessly until he was robbed by Timo Werner, who squared for Stindl to tap home in to an empty net.

The goal gave the European side a level of confidence they'd previously lacked and they started to pose a threat on the break. They nearly had a tangible reward for their improvement when Leon Goretzka screwed wide from a tough angle after some fluent build up play. The world champions were now firmly on top and Julian Draxler was the next to try his luck, his right foot effort skimming wide of Claudio Bravo's right post before Stindl was denied by the Chile keeper after some more overplaying from Chile's back line.

Chile had much of the ball early in the second half but it was Germany, and their skipper Draxler who had the first real chance. The PSG man raced on to a through ball and clipped towards goal but a diving Chilean defender deflected the shot away. 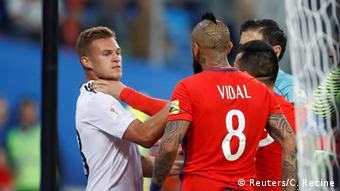 The match had plenty of flashpoints

As the game entered its final half hour, things started to get heated, with Bayern Munich teammates Vidal and Joshua Kimmich butting heads and a couple of 50/50 refereeing decisions riling both sides. But the biggest flashpoint came in the 65th minute when Gonzalo Jara threw an elbow in to Timo Werner's jaw on the left touchline. The referee consulted his video assistant who judged it to be only worthy of a booking.

Chile poured forward, with Sanchez and Vidal both being denied by last ditch blocks. But it was Angelo Sagal who missed the biggest chance of all. Substitute Edson Puch did brilliantly to beat ter Stegen to a loose ball and keep it alive by pulling back to the forward. But with time and space to spare, Sagal leant back and shanked the shot over from eight yards out.

True to their ferocious reputation, Chile never gave up. But, after a spot of comic relief which saw Emre Can cling to the ball with his arms on the ground and Löw stride on to the field to try and break up a fracas, they had one final chance as Sanchez stood over a free kick. It was good but not good enough. Once again, it was Germany who were decisive in the moments that mattered and once again it was  a German skipper that lifted the trophy.