While in Berlin, Israel's foreign minister has left a cloud over the Mideast peace process, calling it a waste of money.

Lieberman has been making his first official visit to Berlin

In Berlin, the last stop of his four-day European tour, the right-wing minister refused to commit to a two-state solution for Israel and the Palestinian Territories. 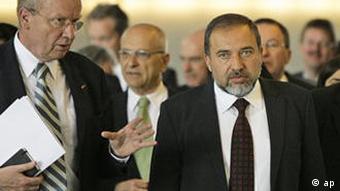 During talks with members of the German parliamentary Foreign Affairs Committee Lieberman said the peace process had been little more than a waste of money. He also brought up Iran, saying the country was a major threat.

Later in the day, Lieberman paid his respects at Berlin's Holocaust memorial, laying a wreath at the 19,000-square-meter monument in the center of Berlin.

Germany's top diplomat urged the controversial Israeli foreign minister to adopt a two-state plan as the basis for peace in the Middle East and the "sole path to peace and security."

The German minister said it was important to stregthen moderate forces in the region and actively involve them in the peace process.

With regard to the situation in the Gaza Strip, Steinmeier said it was imperative that Palestinians had access to aid supplies.

The Israeli foreign minister, who heads a nationalist party in Prime Minister Benjamin Netanyahu's coalition, caused a stir on his first day in office, when he announced that Israel was no longer bound by the so-called Annapolis peace process, which formed the basis of the Israeli-Palestinian peace talks in 2008.

Lieberman's European visit - which has included meetings in Rome, Paris and European Union talks in Prague - was mostly conducted out of the media eye. In Berlin, no joint press conference or photo call was scheduled for his meeting with Steinmeier.

This echoed Lieberman's reception in France, where Foreign Minister Bernard Kouchner chose not to hold a joint press conference as had been customary when Lieberman's predecessor Tzipi Livni came to Paris.

Merkel says "no alternative" to two-state solution in Middle East

German Chancellor Angela Merkel has said there is no alternative to a two-state solution to the Mideast crisis following talks in Berlin on Wednesday with Jordan's King Abdullah II. (06.05.2009)

Israeli Prime Minister Benjamin Netanyahu has demanded Palestinians recognize Israel as a Jewish state. The call was made during his meeting with the visiting US special envoy to the Middle East, George Mitchell. (16.04.2009)

Israeli Labour Party head Ehud Barack's decision to take part in a government led by hardliner Benjamin Netanyahu is a disservice to the Labour Party and, more importantly, to hopes for peace, writes DW's Peter Philipp. (25.03.2009)