Statehood bid an acid test for UN, say German Palestinians | World| Breaking news and perspectives from around the globe | DW | 19.09.2011

This week the United Nations is facing one of the most intransigent conflicts in the world, as the Palestinian Authority makes a bid for full membership. But what's the view of the Palestinian diaspora in Germany? 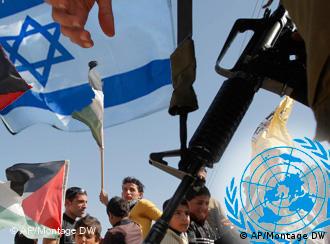 There is no turning back now, despite the best efforts of the United States, Israel and the European Union. President Mahmoud Abbas confirmed in a speech that the Palestinian Authority would submit a bid for full United Nations membership to the Security Council on September 23. Abbas said he wanted to see a Palestinian state recognized along the lines of the pre-1967 borders with East Jeruasalem as its capital.

The move backs the US into an embarrassing corner, because the bid will presumably force the Obama administration to make good on a threat to veto the move, which will damage the US reputation in the Middle East.

The other option was to seek a lesser status as a non-member observer from the UN General Assembly, where the US has no veto power - but that now appears to be moot. 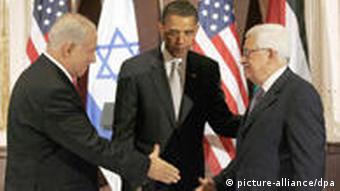 The bid backs Obama into a difficult diplomatic corner

The Palestinian move also forces the Security Council to confront the split over the issue among its five permanent members. Russia and China have publicly backed the bid, the US is seeking Britain's support in opposing it, while France is on the fence - sympathetic to the Palestinians but hoping to find a common European compromise with Germany.

Whatever happens, it looks set to be a watershed week at UN headquarters in New York - at least that is what many Palestinians are hoping. In its own way, the bid is on a par with the Oslo Accords of 1993, the landmark deal that handed some autonomy over the West Bank and Gaza to the Palestinians.

The gravity of next week's events, however they unfold, is made clear by Salah Abdel Shafi, General Delegate of the Palestinian Authority in Germany.

"It's very different, but in political terms, it's much more important than the Oslo Accords," he told Deutsche Welle. "The Oslo Accords spoke about the establishment of a limited self-rule, now we are talking about a legal step where the world is going to recognize Palestine as a sovereign state. So in a political sense, it's much bigger."

Shafi is a diplomat, but his work involves providing support to the Palestinian community in Germany. This is the largest swathe of the Palestinian diaspora in Europe, with 150,000 people of Palestinian origin - and some 30,000 in Berlin alone.

"Most of the Palestinian community, particularly in Berlin, are refugees, which means their families are the ones who were forced to leave Palestine in 1948," said Shafi. "Now for these people, probably one of the main aspects of this political conflict is the right of return."

The UN can't grant that right, but many see next week's statehood bid as a small but tangible step toward achieving it. One of them is Abu, a West Bank-born taxi-driver who has been living in the German capital for 22 years. 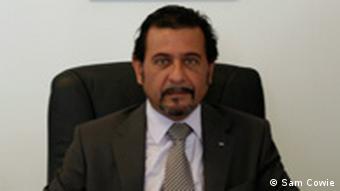 "If the Palestinian state is going to be recognized in the United Nations, what about the refugees? Who will bring them back?" he said at the Orient House, a cultural center in northern Berlin where many Palestinians meet. "Everyone wants to go back to his country. Because they have no rights wherever they are. We support the recognition of Palestine in the United Nations, because when they recognize Palestine as a state, they will have the responsibility for the Palestinians and the refugees."

Other Palestinians in Germany are not as optimistic. "This will not change reality on the ground," says Shafi. "Palestine will still be under Israeli control. We know that exercising sovereignty over our territory would only come as a result of negotiations with Israel."

Few Palestinians abroad are expecting any concrete changes to their circumstances, in the event of a successful statehood bid. But its symbolic importance is not lost on anyone. Mohamed, a retired engineer, expresses a common opinion in the community.

"Did you know that two-thirds of the Lebanese population live all over the world? But if they want to go back, they pack their suitcases and get in a plane and go back to their homeland," he said. "We don't have that. I want my rights, first of all, and then, if I want to go back or not, that's a different question."

Osama, a 30-year-old computer technician from Gaza, has no intention of returning. "What does independence mean?" he told Deutsche Welle. "Why would I go back? There's no education, no healthcare, no infrastructure. When I was there, my daughter was sick, we couldn't get her milk or medicine. All the while, aircraft were flying over. I have bad memories of that place."

A help or a hindrance?

For Mohamed, next week will be an acid test for the sincerity of the international community. "It would be disgrace if the UN and the Security Council don't accept the bid. A disgrace," he said. "Because they have always talked about a two-state solution. They have to show us what they are in favor of. Are they for a two-state solution or not? They should honor their responsibilities." 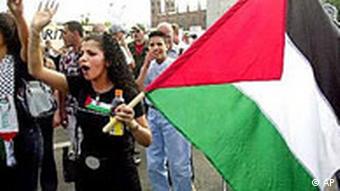 But the view from across the Atlantic is very different. Elliott Abrams, senior fellow for Middle Eastern Studies at the US think tank the Council on Foreign Relations, thinks next week's bid will only harm the chances of peace. For him, Obama's opposition to the bid is simply rational.

"This is just a step away from a real solution, this is just theatrics in New York, and it's going to be quite harmful," he told Deutsche Welle. "The only way to a two-state solution is an Israeli-Palestinian negotiation."

"Suppose that the text of the resolution says 'Palestine is hereby declared a state based on the 1967 borders,'" Abrams continued. "How does any Palestinian leader after that negotiate with Israel to get something less than the '67 borders? I think it makes the negotiations harder."

According to Abrams a key factor for the Palestinians is that official statehood would give them the right to go to the International Criminal Court to prosecute Israeli officials. "I think that once they have the ability to do that it will be impossible for them to resist it, and you will embitter Israeli-Palestinian relations further. This does not have any positive, practical effects, and it has a lot of negative effects."

During a regional tour of the successful North African Arab Spring nations, Turkey's premier has declared his solidarity with the Palestinian drive to join the United Nations while criticizing Israel's position. (14.09.2011)

Germany has urged caution on the Palestinian drive for full membership in the UN, emphasizing instead the importance of resuming negotiations with Israel. The EU, meanwhile, is struggling to adopt a common position. (13.09.2011)