South Korea was the first country to offer 5G, the latest generation of mobile internet data transmission. But so far, the network is not using its full potential, as Fabian Kretschmer reports from Seoul. 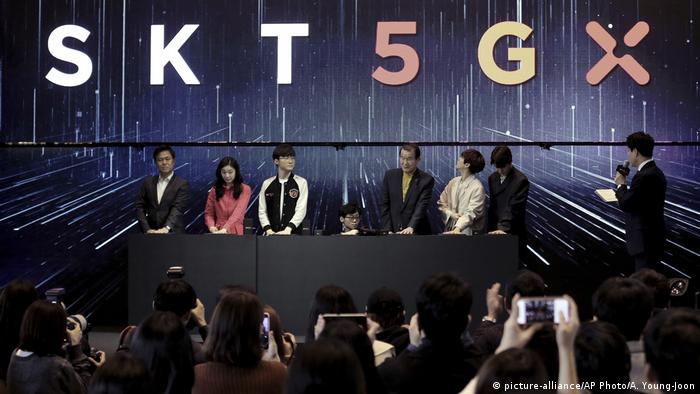 None of South Korea's telephone companies wanted to be late to the party when festivities started in Seoul to mark the launch of the country's 5G high-speed network. SK Telecom welcomed selected customers in the city's Gangnam district, while archrival Korea Telecom greeted early 5G adopters.

No one wanted to miss the day when the next generation of mobile internet services would become available nationwide. Hitting the market on Friday, Samsung's S10 became the first 5G-enabled smartphone in the country, costing as much as €1,100 ($1,235). Because of the hefty price, only 70,000 such phones were on offer, with preorders exceeding supplies by far.

5G is a superfast mobile internet data transmission technology. Industry experts have been speaking of a quantum leap in terms of speed and connectivity improvements. South Korean media have been referring to a new data highway, saying that previous networks have been like one-lane roads, while 5G offers a total of 10 lanes for passing maneuvers.

In theory, 5G has the potential of being even 100 times faster than the current LTE network. But only one-fifth of that potential is used by the infrastructure that's currently in place.

Nevertheless, being the first country to launch 5G means a lot to Koreans. "As a market leader, you influence public reception," said Sanjeev Rana of the CLSA Korea investment group. "South Korea was in the lead with 4G, too, and so it was important for the country to retain its leadership position."

What this means for consumers was demonstrated by the country's largest provider, SK Telecom, during a 5G presentation at its headquarters. Hundreds of journalists saw CEO Park Jeong-ho walk onto a stage set up to look like a craggy lunar landscape. The message he wanted to convey was that like the moon landing, 5G was a big step for mankind. 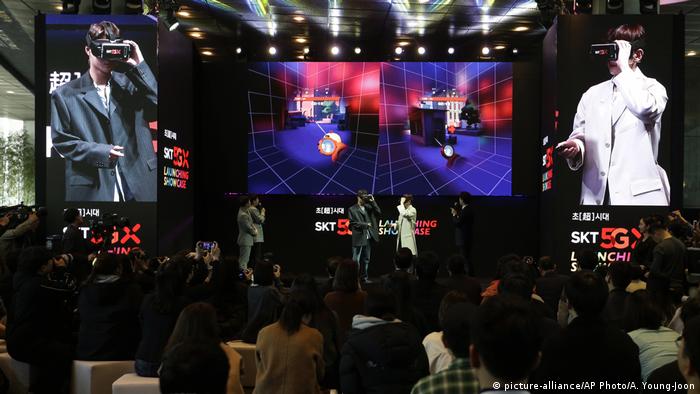 Participants wear VR devices for an audio-visual experience during a 5G media showcase of SK Telecom in Seoul, South Korea

SK Telecom's 5G network already covers 85 cities and communities, with 34,000 base stations installed across the nation. Operators hope to secure some 1 million subscribers by the end of the year, who would have to pay the equivalent of between €30 and €100 per month.

"With 5G, you will see the world as you've never seen it before," promised Korean Telecom's marketing chief, Lee pil-jae. What he had in mind was his company's "Real 360" app, enabling users to enjoy a 360-degree, real-time viewing experience while streaming videos. This can be used during Formula One racing events, if pilots wear 360-degree cameras.

But current applications are limited, making it hard to view current 5G services as trailblazing. "Right now, 5G is more of a technical evolution rather than a revolution," concludes Rana, adding, though, that the technology has the potential fundamentally change whole industries over the next five years.

Autonomous driving for instance requires extreme amounts of data to be processed, meaning that only 5G can bring about a real breakthrough. The high-speed network will also be of tremendous importance in smart factories and automation processes there involving artificial intelligence and robots.

This is expected to result in heavy job losses, while new professions will emerge at the same time. According to Korea's KT Research Institute, the use of 5G will create some 960,000 new jobs by 2035.

While in Europe the introduction of new technologies is rarely met with enthusiasm, South Koreans historically welcome them, showing their seemingly endless faith in technology. And so it's not been an issue in South Korea whether 5G could expose people to dangerous radiation.

There's also no public debate about whether the use of China's Huawei technology may make the country vulnerable to spying attacks. Huawei has been cooperating with South Korea's third-largest telecoms provider, LG Uplus.