Sri Lankans Pull Off Disappearing Act in Bavaria | News and current affairs from Germany and around the world | DW | 19.09.2004

That people disappear is nothing very unusual. But who has ever heard of an entire handball team disappearing? That's exactly what a Sri Lankan team did when they took part in a sports exchange in Bavaria recently. 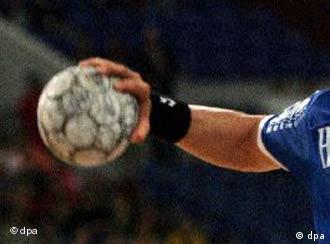 Some of the Sri Lankans had difficulties catching the ball

Players of the handball team TSV Wittislingen in Bavaria are said to have wondered about the poor play of their Sri Lankan opponents two weeks ago during a home match. Many of the Sri Lankans reportedly didn't even seem familiar with the rules of the game and had difficulty catching the ball. "They were so awful," the Bavarian players said after the game.

The reasons for the shoddy performance became clear a day later after the Bavarian hosts waited in vain for their Sri Lankan guests for breakfast. The Bavarians earlier thought the guests must have lost their way during a jog in the woods. But a visit to their rooms showed that the 16 alleged top Sri Lankan handball players and their 8 trainers had other plans. The team had bolted. All that was to be found were a couple of sport kits, shoes and sweaty T-shirts. A farewell letter thanked the Bavarians for their hospitality. "We're going to France," it said.

More light has now been shed on the team's mysterious disappearance. A taxi driver in Wittislingen has told Bavarian police that he along with a couple of other taxis were directed to bring the Sri Lankans to Munich's central railway station.

The alleged handball team is now believed to be living covertly in Italy, home to several thousand Sri Lankan refugees who have built a tight community network in recent years. One of the players, according to the Asian- German Sports Exchange Program group that organized the tournament in Bavaria, has already conveyed to his family in Sri Lanka that he is in Italy and will soon have a job.

While German and Italian authorities scratch their heads about the best way out of the mess, reports say that Sri Lanka officials have confirmed that the country doesn't even have a national handball team.