Sri Lankan election - 'The tighter the race, the more violent it threatens to be'

With President Mahinda Rajapaksa's popularity fading, many expect Sri Lanka's presidential election to be a tight race. But with the increased competition comes a great risk of violence, as analyst Alan Keenan tells DW. 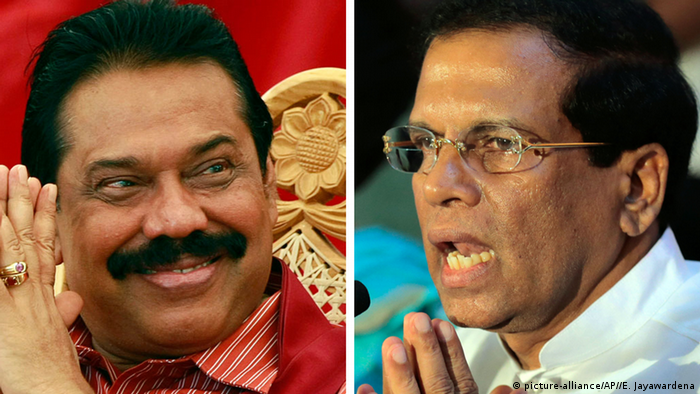 Nearly two years ahead of schedule, Sri Lanka will go to the polls on January 8, with Rajapaksa set to run for a third term - a move widely seen as an attempt by the President to seek a fresh six-year mandate amid signs of fading popularity. Rajapaksa, who first came to power in 2005, scrapped the two-term limit on the presidency soon after winning re-election in 2010.

The 68-year-old, whose administration has been accused of corruption and nepotism, is under intense international pressure to probe war crimes allegations and promote reconciliation with the country's Tamil minority following a decades-long civil war.

The Sri Lankan leader will be contesting the poll with 18 other candidates, including his former health minister, Maithripala Sirisena. Backed by the main opposition United National Party, Sirisena has vowed to abolish the president's executive powers and strengthen Parliament and the judiciary.

Alan Keenan, Sri Lanka analyst at the International Crisis Group (ICG), says in a DW interview that with many indications that the race will be close, fears are growing in Sri Lanka that President Rajapaksa and his powerful brothers may resist leaving power even if Sirisena receives a majority of the votes. 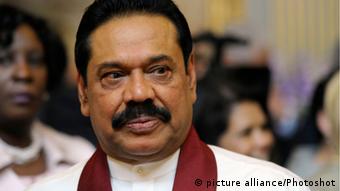 Keenan: 'Rajapaksa has the ability to marshal the full resources of the state in his favor'

DW: Do you expect the upcoming elections to be a close race?

Alan Keenan: All indications are that if the vote is free and fair, the race will be close. There appears to be a lot of enthusiasm for the candidacy of Maithripala Sirisena, who has assembled a formidable opposition coalition. At the same time, President Rajapaksa remains popular among many Sinhalese voters, is a skilled politician and has the ability, if not the authority, to marshal the full resources of the state in his favor.

The candidacy of Sirisena, until last month the health minister and the General Secretary of Rajapaksa's own Sri Lankan Freedom Party (SLFP), has split the ruling party. Sirisena has been joined by a number of other senior members of the SLFP. Also leaving the government to join the opposition was the Jathika Hela Urumaya (National Heritage Party, or JHU).

A strongly Sinhala Buddhist nationalist party, the JHU has been an important supporter of Rajapaksa's hardline policies during the war and after. Their departure, combined with that of Sirisena and his SLFP allies, has badly damaged the ruling coalition and weakens Rajapaksa's chances considerably.

How different is Sirisena's vision of governance from that of Rajapaksa?

Sirisena is running as the candidate of an opposition coalition whose main platform is one of constitutional reforms. The proposed reforms, to be enacted in the first 100 days of Sirisena being in office, focus on the abolition of the executive presidency and the re-establishment of independent commissions to oversee the police, civil service and judiciary and to monitor human rights.

Other candidates, including Rajapaksa in 2005, have promised but failed to abolish the executive presidency, which many believe has grown too powerful. Sirisena's coalition agrees on little beyond good governance reforms, hence the expectation that parliamentary elections would follow after the initial 100 days in order to form a new parliamentary majority. 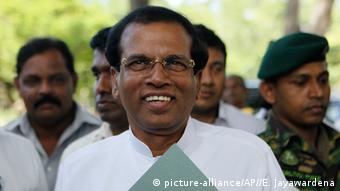 What are the main challenges faced by both men should one of them win the poll?

Should Sirisena win, he may have trouble finding the two-thirds majority in parliament that is needed for constitutional reforms, or winning such a majority through the election of a new parliament. Should this be the case, his coalition's reform agenda would face serious problems.

Assuming the necessary hurdles are overcome, the deep divisions within his coalition will make it difficult to move forward on Sri Lanka's many pressing policy issues - particularly with regard to post-war reconciliation, accountability and power-sharing, as well as the need to offer economic relief to members of all communities.

And as far as Rajapaksa is concerned, the particular challenges facing him will depend on how he wins. If his victory is convincing with no serious questions about its legitimacy, his hand will be strengthened both domestically and internationally. Nonetheless, his government will still face serious questions at the UN Human Rights Council, which next March will debate a report now being prepared by the Office of the High Commissioner for Human Rights (OHCHR) on alleged war crimes by the Sri Lankan military and the Tamil Tigers.

Domestically, his principal challenge, should he take it up, will be to chart a real course towards reconciliation with Tamils; to ensure the rights of Muslims and evangelical Christians who have been subjected to regular attacks by militant Buddhists; and to address the deep concerns over corruption and concentration of power that the current opposition campaign is highlighting.

Should Rajapaksa win re-election by means that large numbers of Sri Lankans consider illegitimate, his challenges at home and abroad will become much more serious. Many expect that if re-elected, Rajapaksa will call a parliamentary election - or possibly a referendum to extend the life of the current parliament. If there are clouds over Rajapaksa's re-election, a potential new round of voting could be especially volatile.

The decision by Sri Lanka's health minister to resign and run in the upcoming snap presidential elections could present a real challenge to the South Asian nation's current leader, as Nira Wickramasinghe tells DW. (26.11.2014)

The Sri Lankan activist has been fighting for decades on behalf of those who cannot defend themselves. His efforts have been recognized with this year's "alternative Nobel prize." (28.11.2014)

Nearly two years ahead of schedule, Sri Lanka will go to the polls in January, with Mahinda Rajapaksa set to run for a third term; a move likely triggered by the President's fading popularity, says analyst Alan Keenan. (22.10.2014)

What role is the Tamil population of the island expected to play in this election?

Unfortunately, many of the issues most important to Tamils - who make up about 12 per cent of the population - are not on the agenda of either Rajapaksa or the combined opposition. The de facto military rule over the northern province, the government's crippling of the northern and eastern provincial councils, the absence of negotiations with Tamil parties towards meaningful power-sharing, and the continued impunity for human rights abuses and alleged war crimes during the civil war - the opposition currently offers no solutions for these issues.

Many Tamils are particularly disturbed by Sirisena's alliance with the JHU, which is opposed to any investigation of or accountability for alleged war crimes by the Sri Lankan military and which wants to revoke even the limited devolution of power allowed under Sri Lanka's constitution.

That said, Tamils have suffered heavily from Sri Lanka's excessive concentration of power and lack of independent checks on executive power, and they would benefit from the democratic reforms the opposition is proposing.

This is why the main Tamil political grouping, the Tamil National Alliance, is expected to signal its support to Sirisena, even if it doesn't formally endorse him. Many believe that the space to begin to address Tamils' current and long-standing grievances will only open up once the Rajapaksas have left power and the system has been at least partially re-democratized. But there are no guarantees this will in fact happen.

How high is the risk that close poll results are contested?

Fears are growing in Sri Lanka that President Rajapaksa and his powerful brothers may resist leaving power even if Sirisena receives a majority of the votes. One possible scenario in the event Sirisena is declared the winner by a narrow margin would be for the president to challenge the count in the courts. This could result in a period of extended uncertainty. The tighter the race for the presidency, the more violent it threatens to be.

A legal challenge would likely ultimately be heard by the Supreme Court, which few observers consider an independent body following the installation of a Rajapaksa loyalist as chief justice in 2013.

Should Rajapaksa claim victory through a means that the opposition considers illegal, there are fears that the military, which is under the control of the president and his brother, Gotabaya Rajapaksa, could be called in to ensure Rajapaksa remains in power. All such scenarios remain speculative and hopefully will not come to pass, but they are certainly in the minds of opposition activists and diplomats. 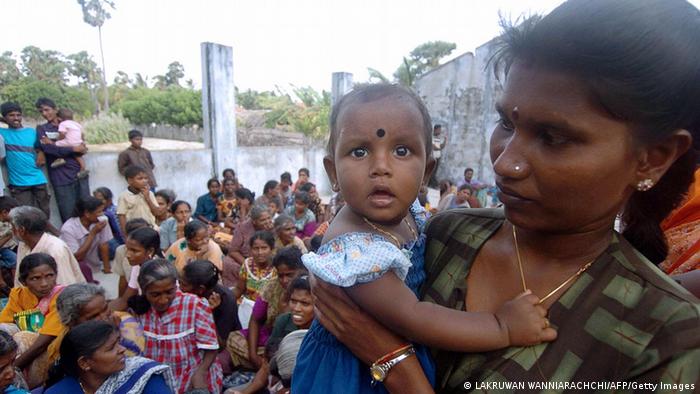 'Many of the issues most important to Tamils are not on the agenda of either Rajapaksa or the combined opposition,' says Keenan

What role could the extremist Bodu Bala Sena (Buddhist Power Force) movement play in such a situation?

Bodu Bala Sena, or BBS, is widely believed to have the backing of the current government and has endorsed Rajapaksa's re-election. Over the past two years BBS has been involved in many attacks on religious minorities and dissenting civil society groups. While the group has been relatively quiet the past few months, many believe it may return to action either before or after the election, perhaps to intimidate or complicate campaigning by the opposition, or to reduce turnout in Muslim-majority areas.

What could the international community do to ease tensions in case of an electoral dispute?

Governments and multilateral institutions with influence over the Rajapaksa government - particularly China, India, and Japan, the Organization of Islamic Cooperation (OIC), but also western governments - should publicly and privately encourage both parties to avoid violence before and after the election.

They should also insist that the government allow election monitors full access to all parts of the country and to effective monitoring of the voting. Most important, all governments concerned with stability in Sri Lanka should send clear messages to the Rajapaksa government that they must respect democratic processes and resist any temptation to cling to power through violent or extra-constitutional means.