December 7 marks the 25th anniversary of the Spitak earthquake in Armenia where some 24,000 people died. A quarter of a century later, some 4,500 families are still living in makeshift shelters, waiting for help. 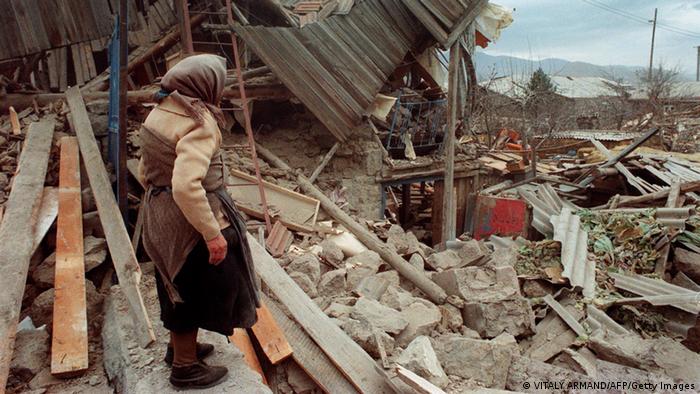 It all happened on a Wednesday. At 11:41 on the morning of December 7, 1988, a 6.8 magnitude earthquake struck the northern part of the then Soviet Republic of Armenia. The effects were devastating.

"It was the most horrible thing I have ever seen in my life," says eyewitness Mania Grigoryan, who still lives in the area today. "There was a river of blood in the street. I remember how they put the bodies of the children in the streets. I cried so much. It's been 25 years but I remember it like it was yesterday."

Grigoryan is used to hardship. At 93 she's survived World War Two, conflict against Azerbaijan in the 1990s and several earthquakes. Ever since the 1988 Spitak quake she's been forced to live in a tin container that barely resembles a house.

"My life is hard," she says. "You can't really call it life. There is no shower here, the toilet is out of order, there is no heat. How is it possible to live here?" 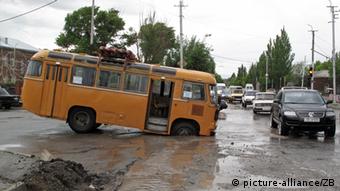 The city of Gyumri still has infrastructure problems today, as a result of the earthquake in 1988

Grigoryan says the winters are the worst. That's when the average temperature is at minus 10 degrees Celsius and she only has a small gas portable stove to warm herself up. All the warmth in the house comes from its small, blue flame.

Grigoryan's tin house stands in one of the many shanty districts scattered across the Armenian city of Gyumri, one of the cities worst affected by the earthquake back in 1988. The muddy streets are filled with rubbish. During the Soviet Union, the city was an important industrial town, especially for textile production. Now it is capital of the poorest region in Armenia.

Gayane Yenogian lives at the other end of the city. She was 22 years old when the quake struck and was working in a local factory that day. The building collapsed and she was lucky to get out in time, she says.

Yenogian also lives in a container, sometimes called a domik. In her house, the windows are made of cheap plastic rather than glass.

"In the morning it's freezing," she says. "This is the main reason for my health problems. My clothes are dirty because I need to carry water to wash them and I don't have money to buy detergent." 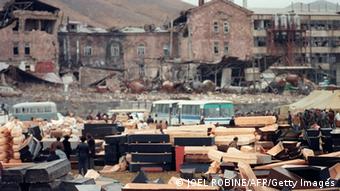 Mountains of coffins: the death toll from the Spitak earthquake was 24,000

Yenogian's mother died in 2001. She believes that it was partly because of the poor living conditions in the domik that she passed away.

Yenogian and Gregoryan are just two of many residents in Gyumri who are still waiting for a public apartment, promised to them after they lost their houses in the quake. The Soviet Union built 4000 apartments before its collapse in 1991, and 20,000 more have been built over the last 22 years. But it's still not enough.

"The main infrastructure like electricity, water, schools and roads were destroyed," says Albert Margaryan, the regional head of Urban Development in the Shirak province, of which Gyumri is the capital.

"We just did not have the financial conditions to go faster," he says.

According to Margaryan, 3500 of those families still living in temporary accommodation are not eligible to get an apartment, either because they came from the villages to look for a job in the city, or because they already had an apartment and sold it.

The latter applies to Sveta Gabryelian. The mother of two sold her apartment because she needed the money to pay for eye surgery. 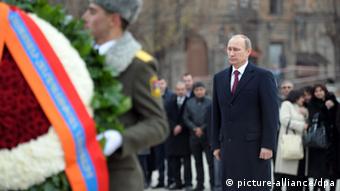 Regional official Albert Margaryan says that some apartments will still be built and given to people at lower prices and in accordance with special conditions. But, until that happens there will still be people dying in Armenia's sub-zero winters, say local residents.

"When it's very cold some people just go to sleep," Sveta Gabryelian explains. "In the morning, they are found frozen to death."

German re-insurance company Munich Re has presented a first estimate of the damage caused by this year’s floods in Central Europe. For Germany, disaster costs may be the highest ever recorded in the country’s history. (09.07.2013)