The editor-in-chief of the weekly Der Spiegel has defended his magazine's front cover illustration of US President Donald Trump beheading the Statue of Liberty. The image has had a mixed response in the German media.

"Der Spiegel does not want to provoke anybody," editor-in-chief Klaus Brinkbaeumer told Reuters TV, adding he was surprised by the impact of the illustration.

Published on Saturday, the magazine cover shows a cartoon figure of Trump with a bloodied knife in one hand and the statue's head in the other, with the caption "America First."

You may also be interested in reading this:
Super Bowl Ad about German immigrant stirs controversy

Trump has faced condemnation over his recent decision to issue an executive order banning the admittance of refugees from seven Muslim-majority countries for 90 days.

"On our cover the American president beheads the symbol which has welcomed migrants and refugees to the United States since 1886, and with democracy and freedom," Brinkbaeumer told the German news agency DPA.

Brinkbaeumer did not comment when asked the extent to which the representation was intended to resemble beheadings by the terrorist group "Islamic State" (IS). 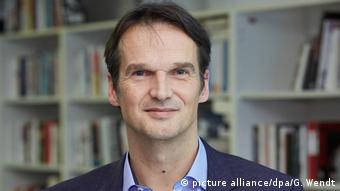 "It's a beheading of democracy, a beheading of a sacred symbol," the cartoon's author - US-Cuban artist Edel Rodriguez - told The Washington Post, adding that he wanted to draw a parallel between Islamist extremist ideas and Trump's radical policies.

"Both sides are extremists, so I'm just making a comparison between them," he said.

Trump is not amused

Trump has attacked Berlin's policies since coming to office in January.

He has said Merkel made a "catastrophic mistake" with her open-door migration policy and his top trade adviser last week accused Germany of using a "grossly undervalued" euro to gain advantage over the US and its European partners.

German Chancellor Angela Merkel had been the US' main European ally under former US president Barack Obama.

The newspaper Die Welt said the cover "damages journalism," while another German daily, the Frankfurter Allgemeine Zeitung, said it was "exactly what Trump needs - a distorted image of him, which he can use to work more on his distorted image of the press."

Bild tabloid drew a parallel with Mohammed Emwazi, a British national known as 'Jihadi John,' who was seen in several videos showing the beheading of IS hostages.

"The Spiegel cover is just what Trump needs - a distorted image of him which he can use to further his own distorted image of the press," it said, adding that that such images could underpin Trump supporters' belief that the media is biased against him and "belong to the establishment, which he is allegedly up against."

The cover has also, however, attracted some praise on Twitter.

Germany's president has urged Europe to take a clear stance against Trump's entry ban for citizens from seven Muslim-majority countries. He said the order was "incompatible" with the European values of human dignity. (04.02.2017)

Germany's minister for economic affairs has voiced "alarm" over some of the actions US President Donald Trump has taken since entering office. She warned that his protectionist policies endanger the German economy. (01.02.2017)