A Super-Harvest-Blood-Moon total lunar eclipse - all at the same time. Here are the most important facts on the amazing event. 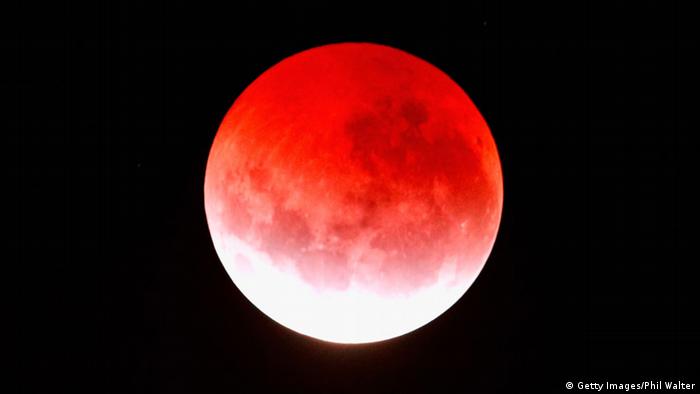 What happens during a total lunar eclipse?

Lunar eclipses only happen during the full moon phase, when the Earth is directly between the sun and the moon. All three celestial bodies must be aligned, and in this rare constellation, the Earth blocks the sunlight, and the moon finds itself - very shortly - in the Earth's shadow.

What is a blood moon?

During a total lunar eclipse, the moon has a red shimmer. In German, this phenomenon is known as a Blutmond, or a "blood moon," but in English it's also known as a - more sanguine, less morbid - "red moon eclipse."

The redness comes from the refraction of light that hits Earth's surface and is bent into Earth's shadow. The high frequency "blue" segment of sunlight is scattered, allowing more of the red segment of the spectrum to make it to the moon.

Does a blood moon mean the world is coming to an end?

You'd be amazed, but this rumor is seriously going around. Haha.

The answer is: Of course not!

Why is the moon going to look so huge this time around?

The moon is about 384.400 kilometers (~240,000 miles) away from the Earth. With a spaceship, you'd need about three days for the journey. An airplane could get you there in about three weeks.

Since the moon revolves around the Earth in elliptical form, the distance from Earth varies. The furthest distance from Earth (apogee) is around 405,000 km, the shortest (perigee) around 363,000 km. During this latter stage, when the moon is closest to the Earth, it looks biggest to us. At the moment, the moon is around 360,000 km away, and that's why it looks so humongous - around 140 percent bigger than normal.

Why do we have only one moon?

Come on, at least we have one! Venus and Mars don't have any. And Mars only has two crumby moons. Jupiter, on the other hand, and Saturn have 67 and 63 moons, respectively. We should note that our solar system's big gas planets have many moons, especially small moons.

They are apparently capable - thanks to their immense gravitational pull - to hang onto many moons and also to rein in asteroids, comets and planetoids passing by.

What are the biggest moons in our solar system?

Where does our Earth's moon come from?

As weird as it sounds, scientists can't say for sure. There are many different theories, and the following one is the most likely:

Around 4.5 billion years ago, the Earth crashed into Theia, a body around the size of modern-day Mars. The Earth and Theia melted into one another, and the collision resulted in huge debris. Our moon, so goes the theory, came from that debris.