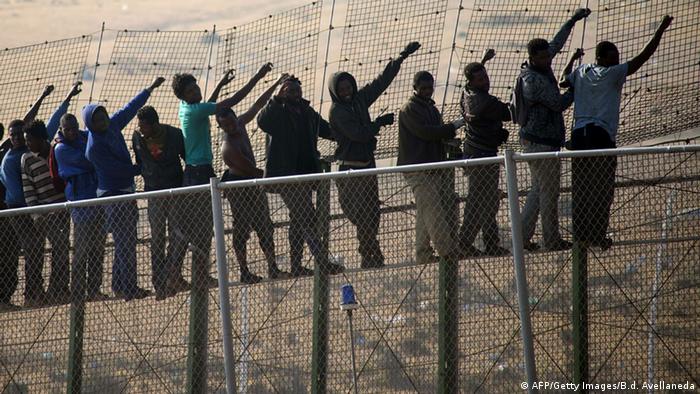 A Spanish court on Wednesday called 16 Civil Guard officers to appear for questioning in March, in relation to the deaths of 15 African migrants who drowned while trying to swim from a beach in Morocco to Ceuta on February 6, 2014. Rights groups had demanded an investigation after witnesses accused Spanish security forces of firing at the migrants in the water. While admitting its forces used rubber bullets, the government denied its forces had targeted the migrants directly.

"The judge will investigate whether the actions of these guards and their use of rubber bullets could have contributed to the death of the five immigrants who were found on Spanish shores," said a statement from the high court in Spain's southern Andalucia region, which also covers Ceuta.

"The investigation of the events will have to determine whether the officers could be responsible for a possible crime of negligent homicide," the statement read, adding that the court had requested information from Moroccan authorities about the bodies found on Moroccan territory.

A non-governmental group working with migrants in Morocco, Caminando Fronteras, said those who died came from Cameroon, Senegal, Guinea and Ivory Coast. News of the summons was very important for their families, group member Helena Maleno said.

"They want justice. They want to know who killed their sons and daughters and why," Maleno said.

Also on Wednesday, activists and officials reported a camp of about 1,200 mostly sub-Saharan migrants at Mount Gourougou in Morocco, which overlooks the Spanish territory of Melilla, had been raided earlier this week.

"Similar operations will be conducted systematically to clear all the places where migrants who plan to organize irregular immigration attempts are squatting," Morocco's interior ministry said in a statement, signaling a new crackdown aimed at halting the regular attempts to storm the Melilla border fence is coming into action. Before the raids, on Tuesday, hundreds of migrants stormed the fortified fence in an attempt to reach Spanish soil. Of them, 35 made it through. Last year, 65 attempts were made to storm the fence (archive image above).

The interior ministry said the migrants were not harmed and the raid was part of efforts to fight against "smuggling and trafficking networks." The migrants captured at the camp were put on buses, with the Associated Press news agency reporting they were driven to remote towns in the country's south.

Authorities in Spain and Morocco have come under criticism for their treatment of migrants. Morocco is caught in a bind - while its northern neighbors demand it halt the flow of migrants, harsh tactics are criticized for violating human rights. Under a new immigration policy which took effect in January 2014, Morocco has approved 18,000 migrants for legal residency.

Thousands of migrants attempt each year to reach Spanish territories of Melilla and Ceuta on Africa's Mediterranean coast, Europe's only land borders with Africa. Many others attempt to reach Europe in boats via the Mediterranean, often with disastrous consequences.

One of the few remaining "gateways" for irregular migrants into Europe, Spain's North African enclave of Melilla, has been reached by 400 people. Others were beaten back by Moroccan and Spanish police. (28.05.2014)