The vessel would have been able to transport several tons of illegal narcotics while largely avoiding detection. The bust was part of an international investigation. 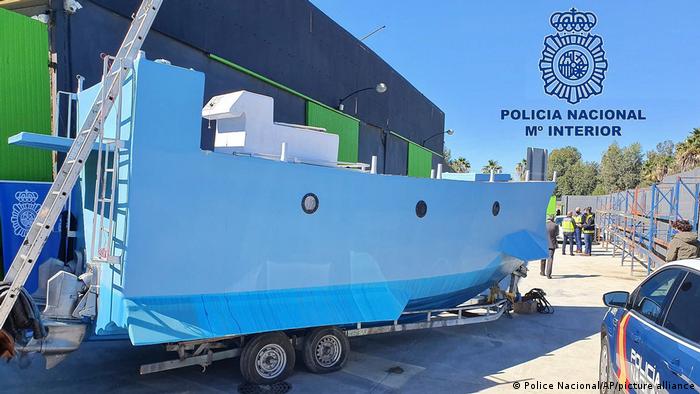 Spanish police announced on Friday the capture of a homemade submarinethat was being built to transport up to 2 metric tons (2.2 tons) of drugs.

The seizure took place in February but was first revealed by the head of Spain's police force, Rafael Perez, in a press conference on Friday.

The 9-meter-long (30-foot) vessel was found in a shipyard in Malaga, on the country's southern coast, following an international operation including five other countries and the European Union crime agency Europol into a global drug-smuggling ring.

The 3-meter-wide semi-submersible vessel was made of fiberglass and plywood panels. It has three portholes and two 200-horsepower engines.

The operation also led to the arrest of 52 individuals and the capture of hundreds of kilos of cocaine, hashish and marijuana.

Never made its maiden voyage

The Spanish National Police Twitter account shared a video of the press conference in front of the seized vessel.

"We present the first semi-submersible vessel located in Spain, that was being prepared to traffic drugs. [We] took part in a large-scale operation that allowed us to detain 52 members of a narcotics production and distribution network," the police said.

"We think it was going to go into the high seas to meet a mother ship [to] take on board the drugs,'' probably cocaine, before returning to Spain, Perez told reporters.

"It is like an iceberg,'' he said of the vessel's structure.

"In practice, nearly all of it goes underwater apart from the top, which is the only part of it that would be seen from another ship or a helicopter.''

He also explained that the submarine had not been finished and had never made it into the water.

Over 300 agents from Colombia, the Netherlands, Portugal, the UK and the US, coordinated by Europol, took part in the operation.

The investigation began when several Spanish companies were found to be importing cocaine from South America disguised and legal produce.

They also discovered several underground laboratories in the Catalonia region, one of which had the capacity to produce up to 750 kilograms of cocaine a month.

The investigators believed that the group financed shipments of cocaine by first selling marijuana and hashish.