The anthem is one of the few in the world that normally has no lyrics. Spaniards often hum, or stand silent when it is played. A lyricized version by singer Marta Sanchez has been praised by Prime Minister Mariano Rajoy. 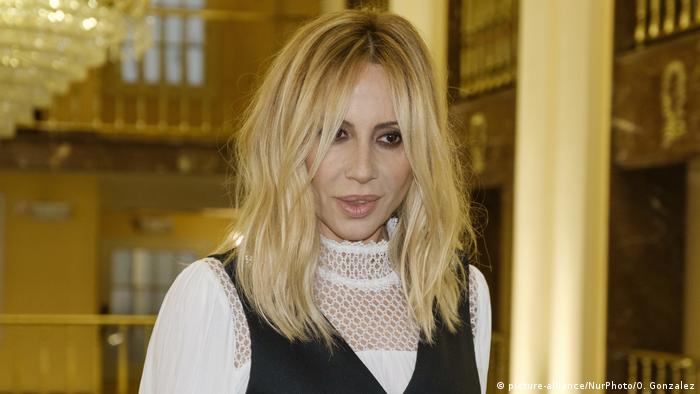 Spanish pop singer Marta Sanchez reignited a national debate over patriotism when she performed the national anthem, with her own added lyrics, at a concert in Madrid on Saturday.

The Spanish national anthem, known as the "Royal March," is one of the few in the world that does not contain any lyrics and Spaniards often hum or just stand silent when it is played.

Sanchez's performance of the anthem caused both praise and criticism, in a country that is still reeling from the political crisis that was sparked by the recent Catalan secession movement in October 2017. The conflict, triggered by the former Catalan government's referendum to secede from Spain, has forced uncomfortable conversations about nationalism and patriotism among citizens all around the country.

After her performance, the singer told media outlets that she wrote the lyrics over a year ago, while living in Miami. Sanchez said she was feeling homesick and longing for Spain at the time. Among the words in her anthem, she sang: "I come home, my beloved homeland, where my heart was born. Today I sing, to tell you all the pride I have."

The singer's efforts were widely commented on by media outlets, public figures and on social media. A video of the performance online reached more than one million views. Sanchez responded to detractors  by saying that she "felt bad for those who don't approve," adding that if people did not feel proud of being Spanish, then they should "go live somewhere else."

Prime Minister Mariano Rajoy reacted positively and openly about the controversy via Twitter, thanking Sanchez for her performance. "Very good initiative. The vast majority of Spaniards feel represented," he wrote.

Not all politicians were so jubilant. Pablo Echenique, member of Spanish opposition party Podemos, said he valued the "creativity" of the singer, but felt that real patriotism should go beyond symbolic gestures. "We understand that patriotism is not just symbols, flags or anthems, it is also public health, public education and worker rights for people in this country," Echenique said.

Read more: Opinion: EU must support all of Spain

The Spanish Socialist party also abstained from praising the patriotism in Sanchez's rendition. Socialist party member Carmen Calvo responded to the debate by only saying "our anthem does not have lyrics and that's that."

The "Royal March" dates back to the 18th century and its composer is unknown. A century later, it became the official anthem of the country, except during the first (1873-1894) and second (1931-1939) republics. Spanish dictator Francisco Franco re-established it during the Spanish civil war (1936-1939) and, in 1975, it was included in the constitution of the present-day democratic government.