Inaki Urdangarin, husband of Spain's Princess Cristina, was handed a prison sentence for crimes including fraud and tax evasion. The princess had been acquitted of aiding Urdangarin. 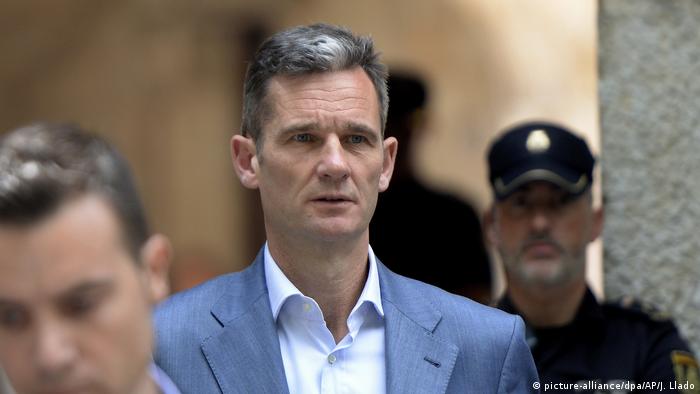 Former Olympic handball medalist and husband of Spain's Princess Cristina, Inaki Urdangarin, reported to a prison on Monday, following an order by a court of the Spanish island of Majorca issued last week. The highly controversial case divided the Spanish royal family and hurt their public image.

The 50-year-old Urdangarin is set to serve five years and ten months on various charges, including graft, tax evasion, and embezzlement.

According to the prosecutors, Urdangarin used his family ties with the royal family to score public contracts relating to sports, then overcharged for events and hid the money abroad. He had been found guilty of using his Majorca-based foundation to siphon off some €6 million ($7.06 million) in funds between 2004 and 2006.

The court found his wife, Princess Cristina, not guilty of aiding Urdangarin in February last year. However, she was ordered to pay a €265,000 fine as a beneficiary of her husband's scheme.

The couple moved to Geneva with their four children after the first allegations surfaced in 2012. King Felipe also stripped them of the titles of the Duke and Duchess of Palma in the wake of the scandal.

Despite the Wednesday order, Urdangarin still has the option of appealing to the nation's Constitutional Court. Experts believe this option is unlikely, as the body has a tradition of not taking any appeals for imprisonment beyond the five year mark.

The scandal involving Urdangarin and Princess Cristina also contributed to the abdication by the former king Juan Carlos, who also sparked public anger by his lavish lifestyle and an expensive elephant hunting trip in 2012, while Spain was still struggling with money problems. The once-popular monarch gave his seat to his son, King Felipe VI, in 2014.