Spain and Greece have urged wealthy nations to meet pledges to help fight poverty in Africa by boosting development aid after some 15 migrants, including children, died at sea while trying to reach Spain this week. 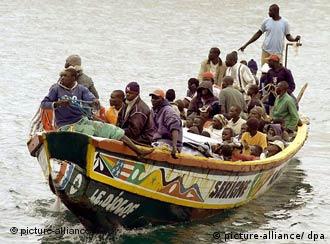 Hundreds try to make it to Spanish shores every year in rickety, overcrowded boats

Speaking at a news conference in Athens on Thursday, July 10, Spanish Prime Minister Jose Luis Rodriguez Zapatero and his Greek counterpart Costas Karamanlis said more development aid was the most effective measure to stem a wave of illegal migrants to Europe.

"We are in an alarming situation. Either we help Africa, either we help fight poverty and desperation, or our future as a region of well-being and progress falls into question," Zapatero said. He urged all European Union states to meet a target of donating 0.7 percent of their income to aid.

His comments came as rescue teams intercepted a small crowded boat early Thursday with 33 migrants and the body of a woman on board some 50 kilometers (30 miles) south of Almeria, a local police spokesman told AFP. The bodies of at least 14 others who died of hunger, thirst or exposure during the crossing, including nine children, had been thrown overboard, the spokesman added.

Calling the deaths "an almost unbearable tragedy," Zapatero urged developing countries to "assume their responsibilities" by contributing to development aid and guaranteeing that the global food crisis does not worsen world hunger.

Hundreds of illegal migrants die each year trying to reach Spain's Canary Islands or its southern mainland coast, using rickety fishing boats from Africa. Many more die in the perilous crossing to Greece from Turkey or North Africa. 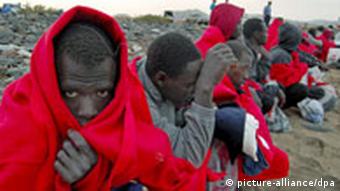 A Spanish aid group, the Organization for Human Rights in Andalusia (APDH-A) estimates that a total of 921 would-be illegal immigrants died at sea trying to reach Spain in 2007.

Of these, 732 perished close to the Atlantic coast of North Africa at the start of their journey and 189 near the coasts of Spain, it said. The majority, 629, were from sub-Saharan Africa, 287 were from North Africa and five were from Asia.

"As long as people are desperate and cannot feed their children they will try to reach Europe," Zapatero said, adding his socialist government would meet promises to raise development aid despite an economic slowdown. "It is unacceptable that as extreme poverty increases we see development aid fall ... the West has the resources and the capacity to help extreme poverty disappear," he said.

As part of the United Nations Millennium Development Goals, the world's wealthiest nations agreed to provide 0.7 percent of their income in development aid by 2015. The initiative includes a series of targets aimed at reducing poverty and improving living standards around the globe.

So far, only Denmark, Luxembourg, Norway, the Netherlands and Sweden have met or surpassed the target.

However, France, which currently heads the six-month rotating EU presidency, has pushed for a crackdown on illegal immigration. The European Commission estimates there are up to 8 million illegal migrants in the bloc.

But an African rights watchdog warned Thursday the new rules would make matters worse for immigrants and increase crime.

Dakar-based Raddho slammed "the EU policies of criminalization and locking up of migrants and asylum seekers," referring to an EU decision to detain illegal migrants for up to 18 months.

Though Zapatero's center-left government has adopted a more liberal attitude towards illegal migrants, Spain has stepped up air and sea patrols in recent years to secure its borders. It has also signed repatriation agreements with several African countries to make it easier to send back undocumented migrants.

"Greece and Spain suffer similar problems and the drama of illegal migration in particular," said Zapatero. "We are in agreement on the migration pact, we agree on strengthening the Frontex (EU frontier) agency, we agree on development policy, we agree on repatriation."

Karamanlis also said he had discussed proposals with Zapatero for a common EU coastguard. "This could be beneficial for all Mediterranean member-countries and the European Union in general," he said.

The citizenship test to be introduced for would-be Germans has met with broad resistance. It's too hard, too ideologically biased, historically unsound and littered with errors, say its detractors. (10.07.2008)

A new EU law that calls for the swift deportation of illegal immigrants has been loudly criticized by Latin America, which has threatened to halt trade talks as a result. (23.06.2008)

The human rights organization Amnesty International denounced the European Union's policies on asylum-seekers, calling them a lottery for the right to stay in what it has described as Fortress Europe. (16.04.2008)

Some 21 passengers aboard the flight from Morocco fled after the emergency landing, prompting authorities to investigate if the incident was linked to illegal immigration.