Spain Pushes for European Response to Illegal Immigration | Europe | News and current affairs from around the continent | DW | 21.09.2006

Spain has launched a new push for European help in dealing with a massive wave of illegal immigrants washing onto its shores in the Canary Islands. Some German politicians, however, feel help isn't necessary. 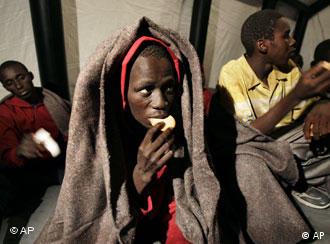 A would-be immigrant was intercepted by the police on Fuerteventura, a Canary island

Meeting with his EU counterparts in Finland, Spanish Justice Minister Juan Fernando Lopez Aguilar said that his country was urging other bloc members to show more solidarity with those states responsible for securing the union's external borders.

"We're not going to stop until the whole of the European Union provides an answer, because an answer is needed," he said, adding that Italy and Malta were also affected.

"We come here, not to ask for help but to push for the proper help that is needed, not only for Spain but for the rest of the European member states which are the southern frontier of the European Union," he said.

When asked what he thought was needed, Lopez Aguilar said: "Money, resources, means, determination and the consciousnesses that this is not a simple contingency, this is a reality which is going to accompany all of us along the way in the first third of the 21st century."

The European Commission, the EU's executive body, has been virtually powerless to deal with the problem, apart from providing funds, and has implored the bloc's 25 member countries to show more solidarity. 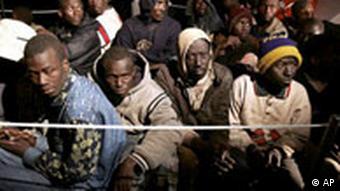 Many immigrants from Africa die during dangerous journeys to Spain

Politicians in Germany, however, are not pleased with the notion of the EU helping Spain out in dealing with its illegal immigrants.

Since the beginning of the year more than 25,000 illegal immigrants, a record number for any one year, have arrived in the Canary Islands off the northwest coast of Africa.

"Spain won't go under because of that," Beckstein said.

He added that Germany has had to accommodate 448,000 illegal immigrants without EU aid.

Does Legalizing Immigrants Attract Even More?

The wave of African immigrants landing on the Canary Islands continues. Conservative politicians blame Spanish PM Zapatero's immigration laws for attracting even more. But is their criticism founded? (12.09.2006)

The Spanish deputy prime minister has criticized EU nations for the shortfall in assistance as Spain struggles with huge numbers of refugees arriving on the Canary Islands from North Africa. (31.08.2006)

The European Commission has unveiled plans for rapid reaction teams of border guards to police Europe's frontiers, as Spain and Malta haggled over who should deal with a fresh wave of illegal immigrants. (20.07.2006)