Spain: Lava from La Palma volcano to reach the ocean

Authorities have cleared the coastal waters off the Spanish island of La Palma where lava is expected to meet the sea and propel toxic steam into the air. 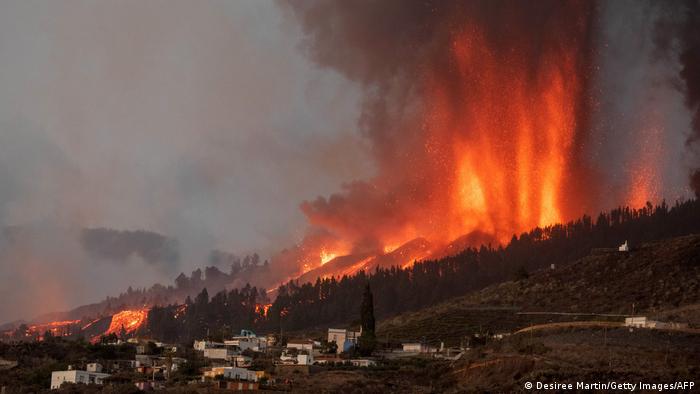 The lava flowing from the Teneguia volcano on the island of La Palma will reach the coast and make contact with seawater in the evening local time, Spanish officials said on Monday.

No fatalities or injuries have been reported so far following the eruption in the Cumbre Vieja National Park.

The volcano erupted on Sunday, following a 3.8 magnitude tremor and after a week of seismic activity underneath it.

"It is still active and will continue to be active for the next few days," regional leader Angel Victor Torres told a news conference, following a meeting with local leaders, volcano experts and civil defense authorities.

Anticipating the effects of the impact between lava and seawater, authorities closed down shipping in the area to the west of the island where this is expected to occur.

The Volcanology Institute of the Canaries said on Sunday that when the lava reaches the sea, it could launch a cloud of toxic gases into the air as the molten rock cools rapidly.

The lava flows of about 1,000 degrees Celsius (1,832 Fahrenheit) are currently moving at 700 meters (2,300 feet) per hour, according to the institute. Around 100 homes in its path have already been destroyed.

Lava crept into the town of Los Llanos de Aridane, which was fully evacuated. Mariano Hernandez, head of the island's government, described the situation in the area as "bleak,'' as a 6-meter (20 feet) high wall of lava has been "consuming houses, infrastructure, crops in its path to the coast,'' according to state news agency EFE.

Spanish Prime Minister Pedro Sanchez canceled a planned US visit and flew to the island on Monday, where he said that "all of Spain is with La Palma."

Sanchez said the government would provide quick help to all those affected. "The citizens of the island can rest assured because the state has sufficient resources and personnel at its disposal," he added.

National and regional authorities thanked scientists for helping the community to prepare for the eruption through their monitoring and warnings, which in turn helped saved lives.

The island of La Palma, one of several in the Canary Islands group, has around 83,000 residents. Unlike the better-known islands of Gran Canaria, Fuerteventura, Lanzarote and Tenerife, La Palma is not a popular tourist destination, but there were still more than 500 tourists on the island on Sunday.

Some 360 tourists were evacuated from a resort following the eruption and taken to the nearby island of Tenerife by boat early on Monday.

Along with Tenerife, La Palma is the most volcanically active of the islands. Sunday's eruption is the eighth since records began and the first on La Palma since 1971.

The last eruption on any of the Canary Islands occurred underwater off the coast of El Hierro island in 2011. That event lasted five months.