Days after the election of a staunchly conservative new pope, predominantly Roman Catholic Spain is set to allow homosexuals to marry and adopt children. 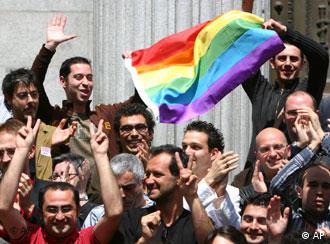 Spaniards celebrate on the steps of the parliament after the vote

Spanish deputies on Thursday approved a government bill allowing homosexuals to marry and adopt children, which if endorsed by the Senate will make it the second European country to do so.

A total of 183 deputies in the Socialist-dominated lower house of parliament voted in favor of the government bill allowing homosexuals to marry and adopt children. 136 were against and six abstained.

The draft legislation, which is expected to take effect in a few months' time pending widely anticipated endorsement by the Senate, gives the same rights and conditions to all legally married couples "be the parties of the same sex or of different sex." 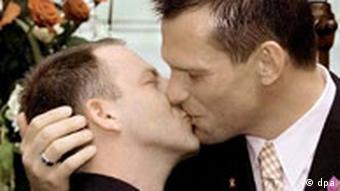 Spain would then become the second European country to allow both gay marriages and adoption of children by gay couples. The Netherlands was the first. Belgium allow same-sex marriages but not adoption.

"Another world is possible"

"Spain is showing that another world is possible," said Socialist party (PSOE) deputy Pedro Zerolo, who has often expressed the wish to become the first gay person to inaugurate the right to marriage in Spain. "The country doesn't just export hams but also ideas and models for society."

The draft legislation amends the Spanish Civil Code to insert the following sentence: "Marriage will meet the same conditions and will have the same effects be the parties of the same sex or of different sex."

Prior to the vote, Socialist Justice Minister Juan Fernando Lopez Aguilar defended the government bill, arguing that it "breaks down the barriers of discrimination which affect the rights and freedoms and notably free choice in the quest for happiness, a fundamental, unwritten right."

The vote was greeted with applause and howls of joy by gay rights activists inside the chamber. They included a gay male couple who brandished a placard saying "Habemus Matrimonium" ('We have a marriage,' in Latin), a reference to "Habemus papam," the words used by the Catholic Church to announce the election of a new pope.

Vote slammed by Catholics, other faiths

However the vote was immediately condemned by Spain's powerful Roman Catholic bishops, who called the bill "radically unjust and harmful to the common good." The bill has infuriated the Catholic Church, which in December branded homosexual behavior "intrinsically bad."

"The higher interest of children requires that they not be fabricated in laboratories nor adopted by marriages of same-sex people," the bishops said in their statement Thursday.

On the eve of the vote, representatives of Spain's major religious faiths, except Islam, had unveiled a joint statement signaling their strong opposition to gay marriage.

"Monogamous heterosexual marriage is part of Judeo-Christian tradition and other religious faiths, and in its basic structure was and remains a fundamental institution in the history of societies of our cultural environment," it said.

"Any change of the institution of marriage requires deep reflection and a vast dialogue and social consensus," it added. Signatories of the statement demanded that the structure of marriage be left unchanged.

"People sleep with who they want"

The Socialist-dominated parliament voted last November to legalize gay marriages from 2005 and give gay couples the right to adopt children.

The Spanish deputies also adopted Thursday a reform of divorce laws which regulates the shared custody of children and accelerates the divorce process, allowing it to be completed in three months in cases of mutual consent. 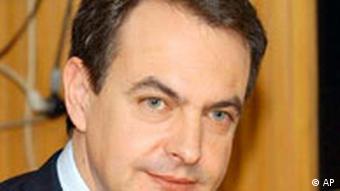 But the only openly practising Catholic in the Zapatero cabinet, Defense Minister Jose Bono, said the church had more important things to worry about than gay marriage.

"People sleep with who they want," he said. "Christ would today be more concerned about the 25,000 children who die each day from hunger in the world and by the deadly wars and breaches of international law."

The Vatican has slammed same-sex unions as "deviant" and a threat to society in a controversial document. The move has been stridently decried by gay rights activists and campaigners across Europe. (Aug. 2, 2003)

A Spanish bill allowing gay marriage is expected to go to parliament has the Catholic Church up in arms. One bishop said it was like unleashing a virus. Other European countries already allow some form of gay unions. (Sept. 28, 2004)