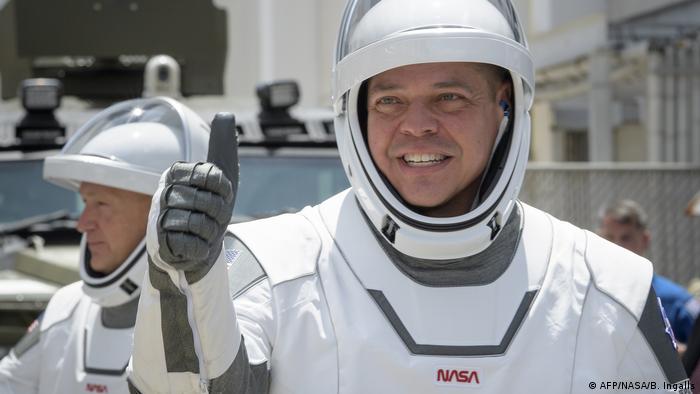 Two NASA astronauts on Saturday blasted off into space aboard a rocket ship designed and built by Elon Musk's SpaceX company.

Veteran space travelers Doug Hurley and Bob Behnken lifted off from the Kennedy Space Center at Cape Canaveral in Florida aboard a sleek, white-and-black, bullet-shaped Crew Dragon capsule on top of a Falcon 9 rocket.

It is the first time that astronauts have been sent into orbit by a private company and is NASA's first human spaceflight from US soil since the space shuttle program ended in 2011.

The Crew Dragon capsule is bound for the International Space Station, 402 kilometers (250 miles) above Earth.

It was the second attempt for the SpaceX-NASA partnership after bad weather delayed the initial launch on Wednesday.

Saturday’s blast off went smoothly, with the first booster stage of the rocket separating cleanly and landing upright on a barge off the Atlantic coast.

The second stage also separated smoothly, sending the astronauts in the capsule on their way to the ISS. The rocket is expected to dock with the ISS on Sunday about 2:27 p.m. local time.

Ahead of lift-off, SpaceX tweeted: "Crew Dragon's hatch is closed" along with footage of the two spacemen inside the capsule, wearing white spacesuits and helmets.

"I would be lying to you if I told you I wasn't nervous,'' NASA Administrator Jim Bridenstine said. "We want to do everything we can to minimize the risk, minimize the uncertainty so that Bob and Doug will be safe.''

"It is absolutely our honor to be part of this huge effort to get the United States back in the launch business. We'll talk to you from orbit," tweeted NASA, quoting Hurley.

Speaking after blast-off, Hurley told his colleagues: "Congratulations for the first human ride for Falcon 9 and it was incredible I appreciate all the hard work and thank you for the ride to space."

NASA severely limited the number of employees, visitors and journalists allowed inside Kennedy Space Center to watch the launch, due to coronavirus. The crowd was relatively small at a few thousand. President Donald Trump and Vice President Mike Pence were both in attendance.

At the center's tourist complex, all 4,000 tickets on sale for the launch sold out within hours. Millions more watched the historic launch streamed live online. 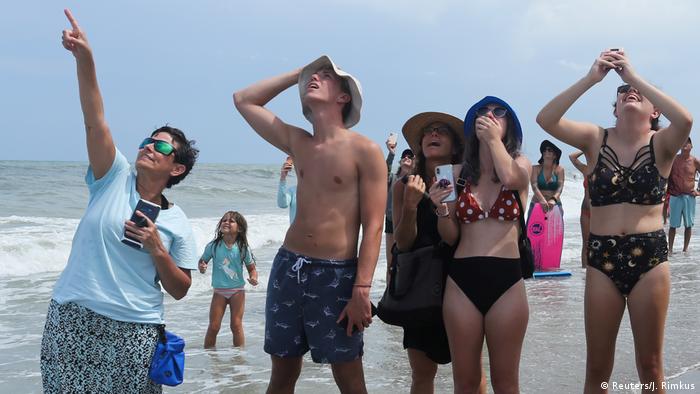 Spectators gathered in Cape Canaveral, Florida to watch the launch

"We've been bombarded with doom and gloom for the last six, eight weeks, whatever it is, and this is awesome. It brings a lot of people together," said Neil Wight, a machinist from Buffalo, New York, who was staking out in a park to watch the launch.

NASA previously said the mission "lays the groundwork" for future exploration of the Moon and Mars — in part by farming out low-orbit operations to contractors like SpaceX. The agency's Artemis program aims to take astronauts to the moon by 2024, including the first woman to step on its surface.

The buzz about the NASA SpaceX test flight, Demo-2, is palpable. Tagged "Launch America," it's the first crewed mission to launch from US soil since the Shuttle program ended. But it's been in the making since Apollo. (27.05.2020)

The first launch of NASA astronauts from US soil in almost a decade has been postponed until Saturday afternoon, just a few minutes before the scheduled lift-off. Possible lightning strikes prompted the delay. (27.05.2020)