Southeast Asian nations call for Europe, US to lift Myanmar sanctions | Europe| News and current affairs from around the continent | DW | 16.01.2011

A group of southeast Asian nations say they hope the release of Nobel laureate Aung San Suu Kyi will act as springboard for democracy, and have called on the West to lift economic sanctions against Myanmar. 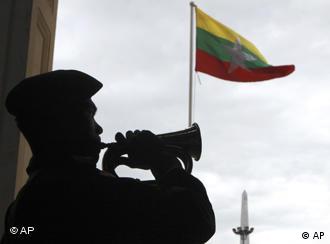 Politicians in and outside Myanmar want sanctions lifted

The 10 members of the Association of Southeast Asian Nations (ASEAN) have called for the European Union and the United States to lift economic sanctions after the release of Aung San Suu Kyi, an opposition leader held in Myanmar under house arrest for most of the last two decades.

A joint declaration released Sunday said sanctions imposed by the United States and European countries "are causing many difficulties in the important areas of trade, investment and modern technologies for the development of ethnic regions."

"ASEAN leaders again urge, especially after the release of Aung San Suu Kyi and the elections, that the policy on sanctions against Myanmar be reviewed as they have an impact on development in Myanmar," Indonesia's Foreign Minister Marty Natalegawa said. 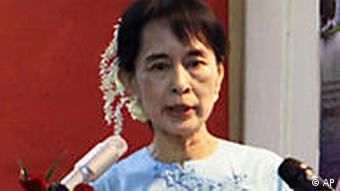 Suu Kyi was released from house arrest in November

Myanmar, also known as Burma, is an ASEAN member. The group maintains policy of non-interference in members' domestic affairs and has engaged with Myanmar's government rather than imposing sanctions.

The association's call followed a statement by Myanmar's main ethnic minority political parties Sunday, urging that the economic sanctions be lifted as ahead of the first meeting of the country's new parliament at the end of January.

All five ethnic groups that won seats in Myanmar's controversial elections in November signed the statement. The largest of the groups, the SNDP, will have 57 seats when parliament and regional legislatures convene on January 31.

Myanmar's November election resulted in a landslide win for government-backed Union Solidarity and Development Party, which won 882 of 1,160 seats amid allegations of fraud and voter intimidation.

US President Barack Obama's administration began a dialogue with Myanmar's military rulers in 2009, but has said sanctions will only be lifted in return for progress on democracy and other concerns.

One of the poorest countries in the world, Myanmar has been ruled by the military since 1962 and has been subject to Western sanctions because of the junta's human rights abuses.

The outlook for military-ruled Myanmar in 2011 appears quite uncertain, despite the recent general elections and the release of democracy icon Aung San Suu Kyi from house arrest. (24.12.2010)

India's Burmese community: Hope and apprehension in the balance

The Burmese community in India is hopeful that the release of Aung San Suu Kyi will strengthen the pro-democracy movement in Myanmar. However, her supporters are aware that their struggle is far from over. (19.11.2010)