South Korea Takes Delivery for Patriot Missiles from Germany | Germany | News and in-depth reporting from Berlin and beyond | DW | 28.11.2008 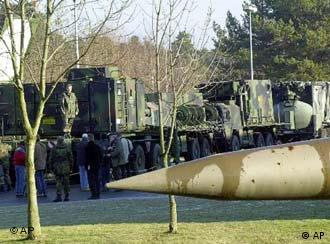 The South Korean Air Force received the first shipment of Patriot missiles from Germany on Friday, Nov. 28, the air force in Seoul said.

The 48 anti-missile and anti-aircraft missiles, which will replace the country's outdated Nike air defense missiles, are to be deployed by 2012 after two years of trial operation.

The first shipment arrived in August but has been undergoing a series of performance tests before Seoul officially took delivery.

South Korea and the US regard North Korea's missile development and its nuclear ambitions as a major threat to regional security.

The two countries remain officially at war after the 1950-1953 Korean War ended with a truce and not a peace treaty.