South America to create new EU-type bloc to defy US | World | Breaking news and perspectives from around the globe | DW | 26.02.2010

South America to create new EU-type bloc to defy US

The 24-strong bloc of Latin American states known as the Rio Group is to join the Caribbean Community to form a new trade body intended to present opposition to US dominance. What can it really hope to achieve? 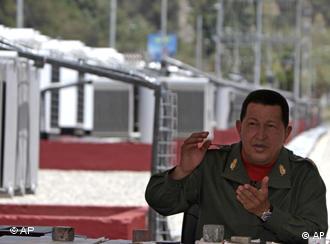 The Rio Group assertively announced the birth of its successor earlier this week, at a summit in a resort town on Mexico's Caribbean coast. Mexican President Felipe Calderon declared that a new body had been formed that would represent both the Group of Rio and the 15-member Caribbean Community (CARICOM).

Going under the provisional name the Community of Latin American and Caribbean States (CELC), the newly announced body specifically excluded the United States and Canada from membership, and intends to consolidate the sometimes tenuous solidarity among the Central and South American states. The exclusion of the two North American powerhouses puts the nascent organization in direct competition with the Organization of American States (OAS), established in 1948, over which the US holds decisive authority.

The declaration is clearly a statement of South America's new self-assertion, and comes in the wake of provocative times, as fellow Rio Group states rallied around Argentina in its current dispute with Britain over oil-drilling rights off the Falkland Islands.

Nikolaus Werz, political scientist at the University of Rostock, believes that the emergence of the new body will only make Europe's diplomatic ties with Latin America more complicated. "We need a single point of contact, and this adds another to the long list we already have - the Rio Group, OAS, CARICOM and Unasur," he told Deutsche Welle.

Almost every Latin American country was represented at the annual summit in Mexico, and together they succeeded in formulating some of the values of the sub-continent. Calderon declared, "We have decided to base an organization on shared values including sovereignty and the non-use of force, including threats of force, international cooperation, ever closer integration of Latin America and the Caribbean and permanent political dialogue."

There was no shortage of high-flown and defiant rhetoric at the meeting, led predictably by Venezuelan President Hugo Chavez, who spoke of finally throwing off the US-yoke. "Now here, in Mexico, we have created a document, a compromise, the creation of a body of Latin America and the Caribbean, without the USA," Chavez said at the summit. "Now we can say from Mexico we have revived the dream and project of Bolivar."

There was a strong sense that the region's most left-wing, anti-American governments had pioneered the creation of the new organization, which is set to convene for the first time on July 5, 2011, in Caracas, Venezuela. But Werz also suggested that the US's influence on the sub-continent had waned in recent years anyway. "The OAS failed as it tried to take on certain challenges," he said. "Other players have increased their presence in South America, notably China, but also the EU."

In an interview with South American broadcaster Telesur, Bolivian president Evo Morales lent his own weight to the vision of a South American brotherhood united against the US. Morales was among many who recently voiced concern about the huge US military presence now stationed on Haiti and the summit pledged to send a further $25 million (18.5 million euros) to the earthquake-hit country.

"A union of Latin American countries is the weapon against imperialism. It is necessary to create a regional body that excludes the United States and Canada," Morales said. "Where there are US military bases that do not respect democracy, where there is political empire with his blackmailers, with its constraints, there is no development for that country, and especially there is no social peace." 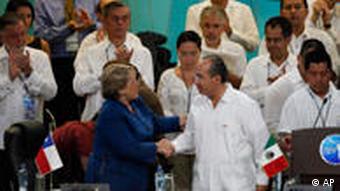 President Calderon of Mexico, third right, announced the birth of the new organization

But the summit also revealed the many tensions likely to threaten the prospective new bloc. The project nearly ran aground this week on the continuing conflict between neighboring Venezuala and Colombia. Colombia is considered a close ally of the US, and Venezuela often perceives itself under threat.

Jamaican head of state Bruce Golding admitted that such tensions were unlikely to go away overnight. "In the past, there were too many occasions where we fought one another. But we still had to live in the same part of the world. I hope that we find ways in the new community to talk about what divides us with the aim of achieving unity."

But doubts have also been voiced about the strength and belligerence of the proposed body when it actually comes into being. Few specifics have been revealed about its structure, much of which is yet to be decided, and Rafael Fernandez de Castro, Calderon's top foreign policy advisor, told the Miami Herald newspaper that the new organization will have neither a building or a permanent staff, and would operate according to a "flexible" program of summits - in other words, CELC would convene either every one or two years.

On top of this, the six nations that have been chosen to draw up the new body's mission statement - Mexico, Brazil, Chile, Jamaica, the Dominican Republic and Venezuela - are mainly countries with no interest in antagonizing the US. The fact that US-friendly Chile takes over the two-year presidency of the Group of Rio in March is unlikely to sharpen tensions within the Americas either.

President Ahmadinejad's short visit to Brasilia is being seen as a calculated risk for Brazilian President Luiz Inacio Lula da Silva. But it promises significant boosts to both leaders. (23.11.2009)

Brazil shows South American neighbors how to trade with Africa

One goal of the second South America-Africa summit this weekend in Venezuela is to increase cooperation between the continents. Most countries could learn a lesson or two on how to do that from Brazil. (25.09.2009)