South Africans worry about picking up the World Cup tab | Business | Economy and finance news from a German perspective | DW | 09.07.2010

South Africans worry about picking up the World Cup tab

As the 2010 World Cup soccer tournament in South Africa draws to an end, taxpayers across the country face paying billions of rands to cover infrastructure costs. Now they're crying foul play. 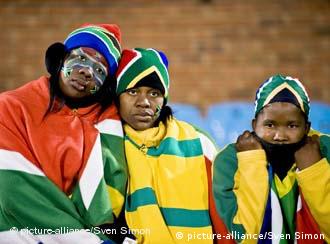 There was a time when Sepp Blatter, president of world's governing football body FIFA, once stood directly behind Nelson Mandela in South African popularity ratings - popularity which peaked, incidentally, directly after he helped bring the 2010 World Cup to South Africa. It was the first world cup to take place on African soil.

Things look a little different these days and South Africans seem to have as much disdain for Blatter and FIFA as they do for a Nigerian drug cartel. When mega-rich FIFA pulls up stakes and heads back to Switzerland, it will be the taxpayers who are forced to pick up the tab for the World Cup party. 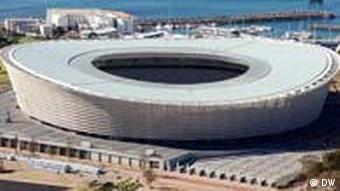 Construction companies are among the big beneficiaries of the World Cup

Eddie Cottle, the world cup delegate of the union-friendly lobby group Labour Research Service and an outspoken world cup critic, quickly boils with rage when he starts to talk about the 2010 World Cup.

"FIFA has made the most money ever of any country hosting the World Cup," he said. "So there is a big question being asked right now in South Africa where is the money going and who will really benefit from the World Cup. As we can see it, the people who have made the most out of the World Cup are the construction companies, FIFA and its partners."

The original plan foresaw some 400,000 visitors to the soccer tournament, spending around 15 billion rands (1.5 billion euros) in the country. That revenue was expected to largely offset the infrastructure costs estimated at about 1.7 euros.

When the games end, however, South African taxpayers will face a bill of more than 3.3 billion euros. Roughly the same amount FIFA expects to post as its net earnings from the event – one of the most profitable of all time.

Nikosinathi Jigega, a member of the nongovernmental organization Street Vendors at the Port Elizabeth World Cup venue, has observed firsthand how FIFA uncompromisingly used its rights to force small merchants, who have traditionally sold fan paraphernalia and roasted corn on the cob at the stadium, to abandon their taxpayer financed booths to make room for McDonalds, Coca-Cola and the tournament's other official sponsors.

On top of the direct World Cup costs come FIFA collateral damages. Many South Africans blame Blatter for the high hotel and airline fees, which have prompted numerous tourists to change their plans - a development that could impact tourism in years to come.

In addition to that, South African taxpayers will be paying for years to maintain the stadiums. After the World Cup tournament in South Korea and Japan ended in 2002, for instance, some of the stadiums were demolished because they could no longer be used.

A similar fate awaits some of the stadiums in South Africa. Those in Cape Town, for instance, were not built in the lively Athlone district as favored by the city government, which wanted to better integrate the suburb. Instead, the soccer temple sticks out like a sore thumb on a green field requested by Blatter and appropriately called Green Point. With the exception of a few league games, the stadium will be used mostly by local teams.

Eddie Cottle criticized the financing, saying that "all this money is essentially coming from public funds - the taxpayers' money."

"And the communities are not receiving the benefits of the public spending," Cottle added.

Ever since the South African team was knocked out of the tournament, locals in South African bars have been discussing who will pick up the tab for the games and whether or not the huge effort was financially worthwhile.

Innocent, the son of the owner of Mozzi's Jazz Club in Soweto, said what many South Africans have been thinking for the past few days: "FIFA will benefit more than us normal South Africans because money goes where the money is."

But there are those who could see the silver lining. One of them was Kenneth, a waiter in the courtyard bar. "I think it's been a good thing for me personally because now I'm working," he said. "So now there is a lot of opportunity and job creation."

Opinion: Foul on the pitch - FIFA needs an overhaul

There has been a lot of debate during the 2010 FIFA World Cup about referee calls and what should be done in the future. But DW sports reporter Sarah Faupel says the real problem is in FIFA's top floor. (08.07.2010)

Proximity to World Cup stadiums can be painful

Not everyone in South Africa is happy about the soccer World Cup. Many merchants and residents located near renovated stadiums and recently developed fan parks say proximity to the tournament has a downside. (10.06.2010)

2010 is the first time the World Cup is being staged on the world's biggest and poorest continent. No one knows what the ultimate impact on South Africa will be, but a look at history shows the effects will be major. (08.06.2010)

Billions of euros have been made from the World Cup, with German companies among the big winners. Now they're hoping their work on South Africa projects will translate into success for their Brazil 2014 project bids. (18.06.2010)

Tourism in South Africa: an industry under lockdown fights for its own survival 11.01.2021