An experimental plane powered by 12,000 solar cells has touched down safely in Morocco, almost a day after taking off in Spain. The mission is being billed as the rehearsal for a round-the-world flight in 2014. 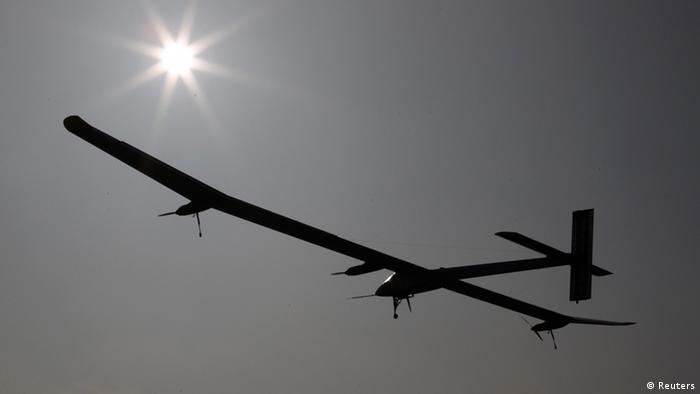 A solar plane successfully flew from Madrid in Spain to the Moroccan capital Rabat on Tuesday, making history in the process. Pilot Bertrand Piccard flew across the Strait of Gibraltar to complete the first solar-powered intercontinental flight.

Piccard, a 54-year-old psychiatrist and balloonist, was welcomed by officials from the Moroccan Solar Energy Agency on landing at Rabat International Airport at 11:30 p.m. local time (2230GMT).

"The flight was absolutely wonderful but I almost did not enjoy it because I told myself that [co-founder and fellow pilot Andre Borschberg] and I have the responsibility to bring this aircraft to Morocco," Piccard said after touching down. 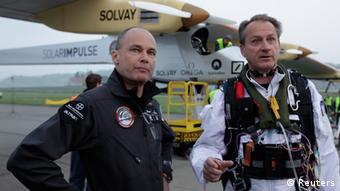 Piccard (l.) and Borschberg have even loftier ambitions for the future

According to Solar Impulse's website, the 830-kilometer (515-mile) flight was completed in just over 19 hours, at an average ground speed of 51.8 kilometers per hour.

The experimental plane has a massive wing-span, comparable with a Boeing 747, though just a tiny cockpit. The plane weighs just 1.6 metric tons, with almost a quarter of that weight made up in battery packs that are charged during daylight to permit the plane to continue flying in the dark.

The plane flies at roughly one tenth of the speed of typical commercial airliners, took 10 years and an estimated 90 million euros ($112 million) to build - but pilot Piccard said the mission was supposed to be symbolic, not functional.

"The question is not to use solar power for normal airlines. The question is more to demonstrate that we can achieve incredible goals, almost impossible goals, with new technologies, without fuel, just with solar energy, and raise awareness that if we can do it in the air, of course everybody can do it on the ground," Piccard said.

To that end, Solar Impulse plans a round-the-world flight in a new and improved prototype plane in 2014.