Solar air pioneers show we can fly without emissions | Environment| All topics from climate change to conservation | DW | 21.04.2016

Solar air pioneers show we can fly without emissions

After nine months of repair work, the aircraft Solar Impulse 2 has taken off to end the first round-the-world flight powered entirely by the sun. DW talked to co-founder and co-pilot André Borschberg about clean energy. 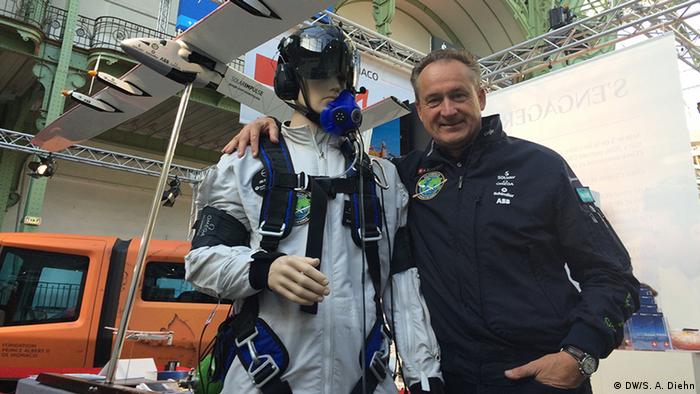 Deutsche Welle: What is Solar Impulse 2 about?

The goal is to fly around the world with only solar energy. We collect the energy everyday from the sun and use it in electric motors. Then we store it in batteries, so we can fly through the night as well. It makes it the first airplane capable of flying almost forever.

How was the process of creating Solar Impulse 2?

Before us, no one was able to fly during the whole day and night in a solar airplane.When we did the feasibility study, it was clear that the airplane had to be bigger than a 747, but as light as a car. The aviation world told us it was impossible, so we had to develop our own solution. We have partners coming from different fields, such as chemical companies, that brought new materials, and helped us build an airplane which is solid, but extremely light.

What is it like to be on the plane for so long?

Once the plane was sustainable in terms of energy, the question was how to make the pilot's life onboard sustainable as well. I, personally, used different techniques like yoga and meditation to keep my mental attitude; the body will then follow.

André Borschberg has shared the adventurous trips with his colleague Bertrand Piccard, now on board Solar Impulse 2.

You are also a business man, what is the business model behind Solar Impulse 2?

The technology needs to be profitable to have its place in the market. The major step forward is to see that solar and wind energy are at the same level or even cheaper than fossil energy. These energies have found their place now and more than half of new power plants around the world will be based on renewable energy.

Clean technology starts being very profitable. The question today is how can we organize the financing for the big upfront investment, because it will be profitable afterwards.

In the case of Solar Impulse 2, where did the funding come from?

It was mainly financed from partners' marketing departments, with the goal to communicate the potential of green technologies.The motivations were different. Some wanted to stimulate research and development activities. Others shared our values and wanted to promote clean technologies, or even develop similar technologies for their businesses.

But how can businesses get motivated to invest in research and development?

They are motivated if they understand the rules of the game, and governments play an important role there. If governments set a clear framework about the development of renewable energies and clean technologies, it will motivate companies to invest in the long-term.

It is a question of taking the right political decisions, and having the courage to do that. Governmental actions need to align with the needs of corporations, and not the other way around. 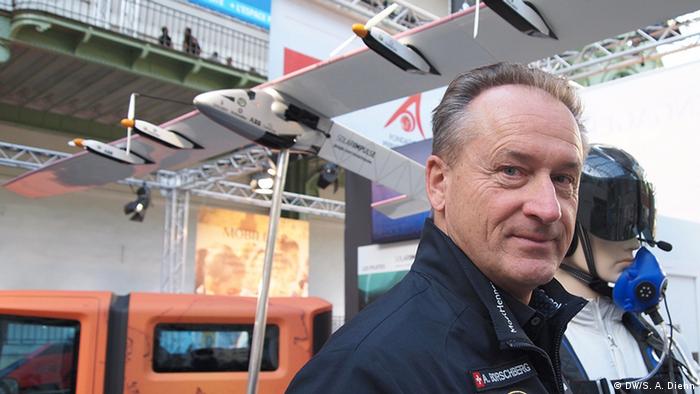 And then, how does innovation happen and what are the preconditions?

It is very important to have an open mind, to put aside the barriers we create ourselves. If you believe there is a way, the solution will be at the end of the road. So it is a question of attitude and perseverance.

You have to understand that obstacles can be opportunities. But it needs time, a lot of motivation and a lot of energy.

Failure is also part of innovation. Someone that fails is much more advanced that the person that did not try yet. The success comes when you try one more time after all your failures.

Would it be possible to completely decarbonize the aviation sector in the future?

If we use efficient technologies everywhere on the ground, we could reduce our C02 emissions by 50 percent. And the aviation sector will follow, that's for sure.

Is the future of air travel in solar energy?

We've done a great first step, but it's only a first step. Air travel will become clean at a certain stage - how, it's difficult to say. The Wright Brothers were probably not able to imagine how a 747 would fly.

The interview was conducted by Sonya Diehn.

Two Swiss explorers attempting to make the first round-the-world solar flight have broken all time and distance records for solar aviation. The plane's pilot has also broken the record for making the longest solo flight. (02.07.2015)

Solar-powered aircraft aims to travel around the world