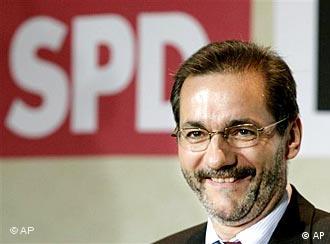 The 51-year-old received 512 of the 515 delegates' votes at the SPD party conference in Karlsruhe. Two party members voted no and one abstained. The result, 99.4 percent in favor of Platzeck, was one of the highest ever achieved for a new party chair, only topped in the late 1940s by Kurt Schumacher.

Platzeck will be the first person from former communist Germany to act as the party's chair. He assumes the top SPD leadership post following Franz Müntefering's resignation after losing an internal party battle over who would be the next secretary general.

Müntefering was party chairman for only 20 months, succeeding Chancellor Gerhard Schröder in the position. On Monday, Müntefering was confirmed by his party as designated deputy chancellor in a coalition government led by Chrisitian Democrat Angela Merkel.

The SPD delegates will vote on additional party personnel, including secretary general and executive board, later in the day.

Müntefering to Step Down as SPD Leader

Franz Müntefering has surprisingly announced that he will not run for re-election as leader of Germany's Social Democratic Party (SPD) in November after losing a key power struggle Monday. (Oct. 31, 2005)

Germany’s Social Democrats have formally nominated Brandenburg Premier Matthias Platzeck as the new man at the helm of the party. The 51-year-old has experienced an astonishing, and high-speed, rise to the top. (Nov. 2, 2005)