Hard-working supporters of FC Union Berlin put finishing touches to a refurbished stadium in time for the club's promotion to the Bundesliga's second division. 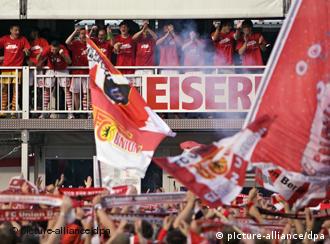 German third-division football club FC Union Berlin clinched early promotion to the second division of the Bundesliga on Saturday, with a convincing 2-0 victory over Jahn Regensburg three games before the end of the season.

The "iron men" - as they are popularly known - have gained notoriety over the past 11 months as their unique fans have been tranforming their old stadium into a modern soccer arena.

"This is the most unique experience of my career," Sylvia Weisheit told DW Radio. Weisheit, who has been a die-hard Union Berlin fan for the past three decades, is the manager of the stadium construction project.

"The fans spend their free time and holidays working at the constuction site. They are totally committed to the community, and any company would be glad to have such workers."

The middle-aged blonde is one of only about six to 10 professional builders at the site. The rest of the 60 to 80 workers turning up each morning at 7 a.m. are Union supporters.

Iron men with an iron will 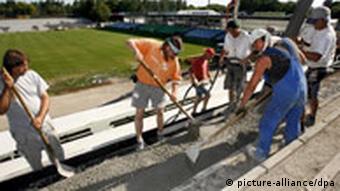 Since construction of the new stadium began last June, around 1,600 volunteers have put in an estimated 90,000 hours of work.

The German Soccer Association (DFB) had threatend to close the club’s Old Forestry Stadium, which dates back to the 1920s.

DFB offcials said it no longer met the security requirements of professional soccer in Germany.

Michael - or "Kibi" as he likes to be known - said the DFB's decision was a test of Union supporters unique fan culture.

Describing the club as a big family bound together by more than just football he said: "Union is a social event. We’ve got the spirit of a neighborhood club where everyone sticks together."

The stadium construction project was proof, he said, that it is possible to combine "commercial soccer with preserving the club's century-old tradition."

FC Union Berlin was founded in 1906 by metalworkers in the industrial district of Koepenick in the east of the city.

After World War Two, Berlin was divided and Union Berlin played in the leagues of the then Communist East Germany.

Union Berlin enjoyed cult status as the club of non-conformists and of all East Berliners opposing the regime. Their eternal rivals in the city were BFC Dynamo, a club run by the dreaded Stasi secret police.

"They had a lot of money and they had the best players," recalls Thommy Thiele, an Union fan since he was 13 years old.

The club frequently hovered on the brink of insolvency. There were fan protests at Berlin’s Brandenburg Gate to force the city government to transform the stadium into club property.

In 2004, Union supporters donated blood to earn enough funds for the club to get DFB approval to play the next season.

Those trying days have forged the club together, the fans say.

"The manager, the president, the coach, the team and the supporters make up a whole system," says Thommy Thiele.

"Dirk Zingler, our president, was standing in the stadium behind me 20 years ago. He is one of us, a part of the family."

While the hard-working fans sweat it out on the stadium terraces, they can watch the players give their all on the training ground right next door.

To see the new oval rise from the rubble of the old stadium has been a huge boost for the team’s morale, said club coach Uwe Neuhaus.

"The team is well aware of the close bonds within the club. This is something special and is currently being underscored by the fans very impressively."

On Saturday, coach Neuhaus and the team paid back their debt to the fans by clinching promotion to the second division.

Ironically, the victory came in the stadium of the hated BFC Dynamo, where the team has played throughout the season. 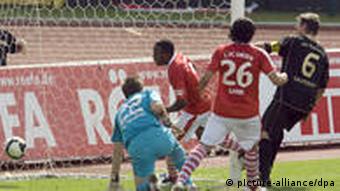 Promotion to the second Bundesliga ushers in new challenges for Union Berlin, said Thommy Thiele. But even if the club will have to struggle commercially, as well as on the pitch, the iron-willed Union community can never be broken up.

"We have to maintain our spirit. We have a lot of common people in our community and there is not a lot of money. In the third division, the second division, the first division or the fourth division, I don’t care. FC Union is important, not the league we play in."

The new Old Forestry Stadium is to be officially be inaugurated on July 8, 2008 with a friendly against Berlin’s top club Hertha BSC.

A day in the Life of... Union Berlin's Volunteer Builders

Third division, table toppers... FC Union Berlin: They call themselves "The Iron Ones". The iron-willed Union fans are helping there club by building a new stadium. (02.04.2009)