Slow wheels of justice for 'last' Nazi trials this fall

On Wednesday, the trial of a former SS man began. At the end of November, an alleged death camp guard will face the judges. Justice for Nazi perpetrators is often slow, but has led to new thinking about the law. 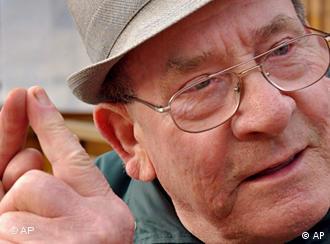 Heinrich Boere, former SS man, does not deny the killings

On July 14, 1944, 22-year-old Heinrich Boere and another man walked into the pharmacy owned by Fritz Bicknese in the southern Dutch town of Breda. Boere asked the pharmacist if he was Bicknese. Then the SS-man is thought to have pulled out a revolver and shot the man several times.

Today Boere lives in a nursing home in Germany, but from Wednesday until December 18, the now 88-year-old will be sitting in a courtroom, answering to charges that he killed Bicknese and two others.

The other of the so-called "last Nazi trials" beginning this fall is that of John Demjanjuk, whose alleged crimes reach another dimension entirely. The 89-year-old retired car worker will face accusations of being a guard at the Sobibor death camp in Poland and helping kill almost 28,000 Jews. The Simon Wiesenthal Center says he pushed men, women and children into the gas chambers.

Both of these men are in their late 80s, which raises the question of why they were not brought to justice earlier. Boere lived openly in western Germany for decades. Demjanjuk had US citizenship for years. 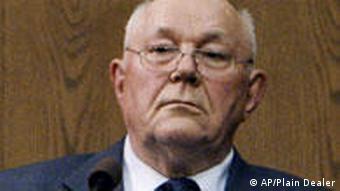 The cases illustrate how difficult it can be to prosecute crimes from this era, as the accused and witnesses alike die and evidence becomes harder to come by. Legal statutes from different countries and periods can also gum up the wheels of justice.

To many, the fact that the two men are answering for their crimes more than 60 years after the fact is an example of a legal system that is not able, or perhaps even willing, to bring all the perpetrators to justice.

In fact, political philosopher Hannah Arendt said the crimes committed by the Nazis had shattered the very foundations of justice in the Western world and it was necessary to rethink what it meant to judge crime and criminality.

But Edith Raim, a historian at the Institute for Contemporary History in Munich, said despite the frustration felt by many at the slow, or inadequate, wheels of justice, the German judiciary has been fairly relentless in its pursuit of Nazi perpetrators.

"It's impressive that the German justice system has been so active in this area for such a long time, even sometimes against public opinion," she said.

"While today the public is very interested in these trials, that wasn't always the case. In the 50s, people didn't want anything to do with them, but the judiciary went ahead with prosecutions."

German prosecutors have conducted investigations of Nazi crimes every year since 1945, unlike in other countries. Austria's last big Nazi trial took place in the mid-70s. The US stopped its trials in 1948, Britain one year later.

It was the trials just after World War Two, however, which garnered the most international attention and left a mark that is still being felt in jurisprudence today.

The Nuremberg trials of top Nazi officials, including Hermann Goering, captivated the world, detailing as they did the unprecedented crimes of the Nazi regime. But legal experts agree that the trials also laid a new foundation for international law, allowing for the first time a court to directly charge and punish an individual based on international law. 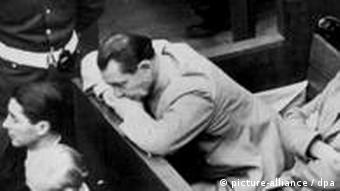 "Up to that point, people had believed a national penal law was needed. Nuremberg put an end to that, saying that some deeds were so horrible that the international community had to directly intervene," said Christian Tomuschat, a law professor at Berlin's Humboldt University.

The trials established that humankind is, in essence, guarded by an international legal shield. Even a head of state could be held criminally responsible and punished for aggression or crimes against humanity.

However, the law limped along while atrocities in the 20th century continued - in Cambodia, Chile, Uganda and many other places. But the war in Yugoslavia in the 1990s put new moral pressure on the international community. It led to the establishment of international courts for that war, for the Rwandan genocide, and the International Criminal Court.

The trials this fall in Germany also stem from still-evolving thinking about international law. They have generated a good deal of interest in the media and among the public.

In 1969, 70 percent of Germans wanted an end to criminal prosecutions for Nazi crimes. Today, calls for pulling down the curtain on this dark period of the past are scarcely heard.

The men charged, Boere and Demjanjuk, are elderly, so it is unclear how much time they would spend in prison if convicted. But that does not lessen the importance of holding the trials, according to historian Edith Raim, who added that criminal justice has always suffered from the fact that it puts the spotlight on the perpetrator.

"The many hundred thousands of victims who weren't able to have a life often are forgotten," she said. "I think these trials can serve as a reminder of the immeasurable suffering these victims and their loved ones endured."

Verdict due for ex-Nazi war criminal

A German court is expected to hand out a verdict against a Nazi war criminal 65 years after the end of World War Two as two more trials are set to start in the coming months. Will these be the final cases of this kind? (10.08.2009)

Germany's highest court has thrown out a request to block the trial of alleged Nazi death camp guard John Demjanjuk. There is now nothing standing in the way of what could be the last Nazi war crimes trial in Germany. (21.10.2009)

Sobibor survivor: Demjanjuk trial will go down in history

Deutsche Welle spoke with Thomas Blatt, one of few to escape from the Nazi-run Sobibor extermination camp. He says he doesn't care whether John Demjanjuk is jailed for working at the camp, just that he tells the truth. (13.05.2009)