Slave Laborers to Be Compensated by 2006

The Third Reich's economy flourished when companies made use of forced laborers, and the debate about how to repay them has lasted decades. Payments for the survivors should now be completed by the end of the year. 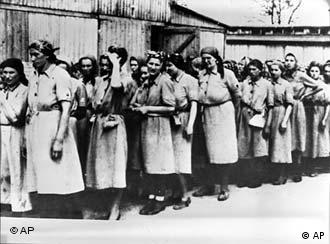 Germany had some 12 million forced workers during World War II

Though their numbers are dwindling, there are still about 1.7 million people who were forced to work in German companies during the Nazi regime and who could receive up to €7,600 ($9,838) from the four-year-old, €5.12-billion Remembrance, Responsibility and Future Foundation, equally financed by the German government and an organization of German businesses.

"We expect the payments to come to a close by the end of the year," the foundation's director said last week, ahead of the start of a series of ceremonies commemorating the 60th anniversary of Germany's defeat in 1945.

So far €3.84 billion have been paid to about 1.63 million forced laborers or their descendants, and about 500,000 claims have been denied. There are about €387 million in interest still available. In exchange for the payments the companies that participated in the organization received protection from further legal action.

"The leading German industrials owe forced laborers because they were worked to death," said Benjamin Ferencz, one of the prosecutors in the Nuremberg War Crimes Tribunal in 1945. "One of the labors told me 'We were treated worse than slaves, you try to keep slaves alive. We were like sandpaper: used, thrown away and burnt with the garbage.'"

Though the Nazi regime lost the war, German companies profited from slave labor. German industrial wealth was 17 times larger after the war than in 1939, according to economic historian Dietrich Eichholz.

Adolf Hitler speaks at the opening ceremony of the Volkswagen car factory in Fallersleben, Lower Saxony, May 26, 1938.

In order to keep up production from 1939 to 1941, as more and more men were being called up for military service, German companies needed 1.2 million workers, and they came in the form of forced laborers. In all, there were about 12 million people taken from German occupied territory to serve as forced laborers during the World War II.

For decades the companies' executive boards got around paying victims compensation by saying they were compelled to use slave labors. That, in turn, makes the German government, not the businesses themselves, responsible for remuneration.

Pressure built up in the 1990s after class-action suits were filed in the United States against a number of large German firms, including BMW, Daimler-Benz, Deutsche Bank, Siemens and Volkswagen -- all companies that played important roles in the Holocaust, according to New York lawyer Edward Fagan.

There were billions at stake for the companies involved in the law suits, as well as an immense public relations problem. To solve those problems the companies set up the Remembrance, Responsibility and Future Foundation with the government.

"I have recently spoken with about 20 forced laborers from Poland, and the reaction is very positive," said Michael Jansen, who was the foundation's head until the end of last year. "For many of the older people who are living on very limited means, this is like a lotto win, and they are very glad that we are helping them."

More than 1.5 million people have so far received payments totalling € 2.6 billion from a German compensation fund for Nazi-era forced laborers. The directors of the fund hope their work will be completed by May, 2005. (Dec. 6,´2003)

Financial compensation to former Holocaust-era forced laborers will be completed ahead of the 60th anniversary of the defeat of Nazi Germany next May. The foundation responsible for the payments is running out of time. (June 25, 2004)