According to Ukraine's defense ministry, six armored vehicles were taken by pro-Russian militants in Kramatorsk in eastern Ukraine. There are also reports of defections to the separatists' side. 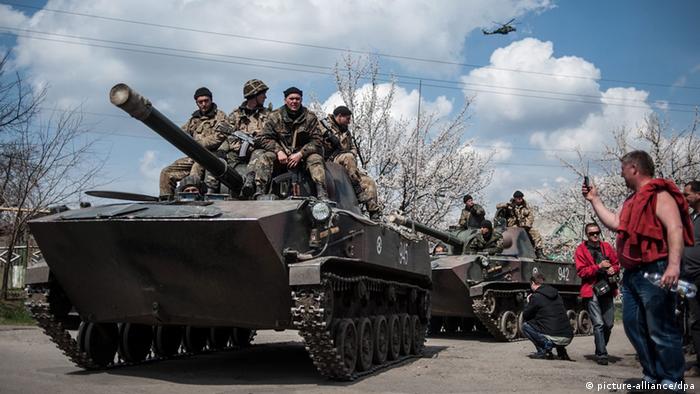 The pro-Russian forces drove the six vehicles from Kramatorsk to the rebel-held eastern town of Slovyansk, to people welcoming them with shouts of 'Russia, Russia!'

The Ukrainian government has confirmed that the vehicles, which were sent to Kramatorsk to help contain the pro-Russian uprising, were in the hands of the separatists.

It was not clear whether they had been captured by the rebels or handed over voluntarily by Ukrainian soldiers defecting to the rebels' side.

Government troops had begun theiroperation on Tuesday, arriving by helicopter to take control of an airfield at Kramatorsk. They had driven the armored personnel carriers (APCs) into the town in the early morning.

The setback for Kyiv comes ahead of four-way international talks on the crisis in Ukraine scheduled for Thursday in Geneva. Russia had threatened to stay away if Kyiv decided to use force in eastern Ukraine.

Meanwhile, NATO has announced it is to boost its forces in eastern Europe.

"We will have more planes in the air, more ships on the water, more readiness on land," according to NATO Secretary General Anders Fogh Rasmussen. He also said alliance defense plans would be "reviewed and reinforced." Rasmussen was speaking after a meeting of ambassadors of the 28 members of the transatlantic alliance in Brussels.

Western nations and Ukraine believe Russia is orchestrating the unrest in eastern Ukraine after it annexed Crimea last month. The West has repeatedly urged Russia to help de-escalate the conflict.

"The Russian government must immediately call off its intelligence-diversionary groups, condemn the terrorists and demand that they free the buildings," Yatsenyuk told a government meeting.

"Today's events...are starting to endanger Europe and the European Union. It is now clear that our Russian neighbors have decided to build a new Berlin Wall and return to the Cold War era," he added.

Since April 6, Pro-Russian separatists have taken control of buildings in about 10 towns in eastern Ukraine and have seized hundreds of weapons.