A famous Zanzibari singer and composer, Siti binti Saad established taarab as a performing art and as a mouthpiece for women in East Africa. In the process, she became a pioneer in many ways.

When did Siti binti Saad live?

Siti binti Saad was born in 1880 in the Fumba village on Zanzibar's main island of Unguja, which is today part of Tanzania. Born into a poor family, she sold pottery on the street before moving to Zanzibar town in 1911. There she started working with musicians and became famous as a taarab singer. She practiced music until old age and died in 1950.

What is Siti binti Saad renowned for?

Siti binti Saad was a star of the taarab musical style, a music she herself greatly influenced. Endowed with a beautiful and powerful voice, she was invited to perform at the sultan's palace. But Siti binti Saad didn't only sing for the elite: She also performed for the working class and her house was a place of exchange and debate.

Before her, taarab was usually performed by educated men who mostly sang in Arabic - the language of Zanzibar's small elite. Siti binti Saad, who had no formal education, was the first famous female singer of the genre and she popularized taarab music by using the Swahili language. Her role was such that the British Gramophone Company brought her all the way to Bombay, in India, to capture her voice, making her the first East African to ever make commercial recordings.

What are Siti binti Saad's songs about?

Always listening to the working population, Siti binti Saad put their concerns to music. Her songs are about everyday life in Zanzibar and talk about actual events. They contain social criticism, denouncing class oppression, corruption, the abuse of women by men and the shortcomings of the legal system. To this extent, taarab, the women's performing art as it was shaped by Siti binti Saad, is highly political.

Whom did Siti binti Saad inspire? 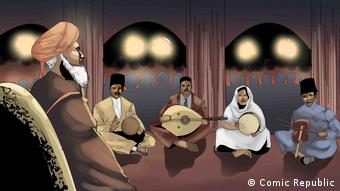 Siti binti Saad inspired many musicians and opened the way for other female taarab singers. She was for instance the mentor of Bi Kidude, who also became a taarab star. Siti binti Saad met the famous Swahili poet Shaaban Robert, who wrote her biography, "Wasifu wa Siti binti Saad". Published after her death, in 1956, this book is an important work of Tanzanian literature and is still studied in schools. Shaaban Robert called Siti binti Saad's songs "the pride of East Africa" and her recordings "a great light in the darkness" left to posterity. A magazine dedicated to women's issues, published by the Tanzania Media Women's Association, also bears reference to the artist: "Sauti ya Siti" ("the voice of Siti").

What is Siti binti Saad's legacy?

Siti binti Saad produced over 250 songs, but only few of her original recordings remain today. Her music is still widely played in Zanzibar, Tanzania and beyond. Her songs are part of the standard repertoire of many taarab bands. Apart from that, 2017 saw the founding of the "Activist Siti Bint Saad Institute", its objectives being to preserve her songs and to promote Zanzibar's values and culture.

Aude Gensbittel, Salma Said and Gwendolin Hilse contributed to this package. It is part of the "African Roots" series, a project realized in cooperation with the Gerda Henkel foundation.

A pronounced pan-Africanist, Nyerere led Tanganyika to independence and later unified it with Zanzibar to form Tanzania. Despite shortcomings, his Ujamaa policy is credited for giving Tanzania a national identity. (10.01.2018)