Years after whale songs became popular worldwide, scientists still know little about how the mammals communicate with each other. One team of scientists is working to solve the mystery by studying bowhead whales. 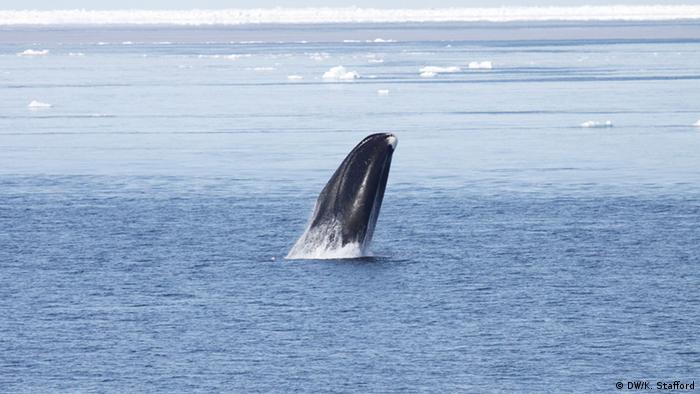 The population of bowhead whales off the coast of Greenland is estimated to be only in the tens. But what those animals lacks in numbers, they make up for in songs, says whale expert Kate Stafford.

Together with a team of US and European scientists, the University of Washington oceanographer has recorded whales singing some 66 different tunes.

"To have over 60 songs was remarkable," Stafford told DW, "especially from what we considered to be a remnant population."

Back from the brink

Bowheads, who are so named for their distinctive long skulls, were nearly hunted to extinction near Greenland 200 years ago by Dutch traders. The animals were wanted for their blubber, the fat that resides under their skin. 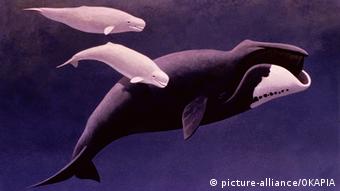 Bowhead whales are seldom seen in the wild, and their numbers are low

These days there are four populations of bowhead whales spread around the Arctic Circle, from the Bering Strait to the Fram Strait east of Greenland.

For Stafford's research in the Fram Strait, she and her team secured two microphones underwater which took nine-minute long recordings every 30 minutes for a year.

When she did, she found thousands of hours of bowhead whale songs, each lasting 45 to 60 seconds each. Most were logged between November and March, which Stafford says means the area has probably become a wintering ground for bowheads - and may be a mating ground, too.

"There was a clear progression through the season of completely different songs," Stafford said, adding that the reason for this remains unknown. 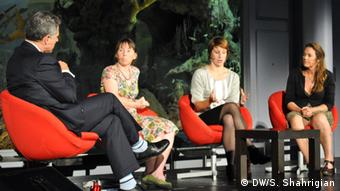 "You know the songs that were playing when you were in high school? Even when you hear them a few years later, you know exactly the year they came out," she said. "Maybe it works like that, maybe there's a song of the year. And you have all these cohorts of these very long-living animals maintaining that song."

Stafford says that one feature unique to bowheads is the ability to produce high and low frequency tones at the same time, giving the effect of singing with two voices.

Whale songs usually start with a few notes or phrases, enter a more complicated stretch and then close with a low, loud bellow. The sounds fall right within human hearing range.

Such sounds elicit all kinds of responses. For New York-based musician Garth Stevenson, they have had a profound impact on his music. 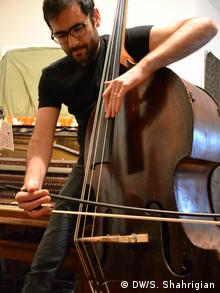 Musician Garth Stevenson has been inspired by whale song

"There are connections in nature that relate closely to music," the double bassist said. "There's definitely this universal sound that flows between music and animals."

Pieces on Stevenson's latest album, "Flying," were inspired by sei whales he says. On a recent trip to Antarctica to score the music for a movie, Stevenson took out his double bass and played on the open sea. Moments later, a group of whales swam right by the boat.

"I guess one of the ways I got into playing whale calls is people starting telling me, 'your music sounds like whales'," Stevenson told DW.

"I hadn’t really listened to whales before. I think there was something that was already in my music but nature has definitely had a big influence on me."

Kristin Laidre, also a scientist from the University of Washington, is currently developing ways to determine the effects of climate change on the Arctic-dwelling narwhale. She says climate change is the biggest threat to that species at the moment. Both Laidre and Stafford say that melting ice has hindered recent research trips to the region.

Stafford herself hopes to keep adding to the body of whale call knowledge. She plans to make bowhead recordings in the Beaufort Sea north of Alaska and in the Davis Strait west of Greenland in the future.

She said that, given the funding, she would also like to return to the Fram Strait to find out if it is one bowhead, or many, who are responsible for a number of songs in a given timeframe.

In the meantime though, her recent trips have simply further increased her sense of wonder about the world's biggest mammals.

"I'm not a whale hugger," she said, "but I'm just so impressed with these animals."

Exploring the inhuman side of music

A four-day festival in Berlin aims to make visitors aware of music in situations they might not expect. The event's installations present works generated by animals, machines - and by accident. (22.02.2013)