Two hawker stalls in Singapore have been awarded a Michelin star, in the newly launched inaugural restaurant and hotel guide to the city-state. Despite the accolade, the owners said prices would not be raised, for now. 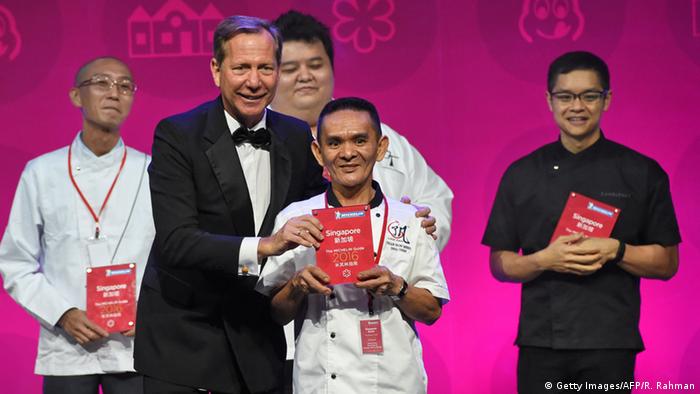 The two Singapore stalls - Hill Street Tai Hwa Pork Noodle at Crawford Lane and Hong Kong Soya Sauce Chicken Rice and Noodle in Chinatown - are among only a handful of street food institutions to receive the coveted culinary designation.

Singapore is the first Southeast Asian country - and the fourth Asian territory - to be rated by the Michelin Guide.

"This is a validation for local food and the food that I've made," said 70-year-old Tai Hwa owner, Tang Chay Seng. Tai Hwa has long drawn big lines in Singapore for its bowls of minced pork and noodles.

“I've heard of the Michelin guide, but I never thought they'd come to the hawker centers and give us such an honor," said Hong Kong Soya Sauce Chicken Rice and Noodle's Chan Hong Meng.

Some 36 different cuisines were featured in the guide, ranging from Chinese to Australian.

But prices at the two hawker's stalls set them apart from most other starred eateries.

"For the first time, you would be able to have a Michelin-starred meal for under Sg$5 ($3.70)," said Michael Ellis, international director of the Michelin guide.

"Singapore was the natural choice for expansion because of the breadth and depth of the culinary scene, where you not only have a wide variety, but also very good cooking. And there is a strong culture of eating out, whether at a hawker stall or in a fine dining restaurant," he told news agency AFP.

France was his muse, and he complained that Germany's didn't spend enough money on good food. Critic Wolfram Siebeck, an advocate of fine cuisine in post-war Germany, has passed away at age 87. (08.07.2016)

The number of chefs in Germany sporting Michelin stars is on the rise. Many of Berlin's restaurants have been awarded the coveted accolade in the new Michelin Guide. (13.11.2015)