Nagaenthran Dharmalingam was sentenced to death for trafficking drugs into Singapore. His lawyers have argued that his mental disability affects his decision-making and impulse control. 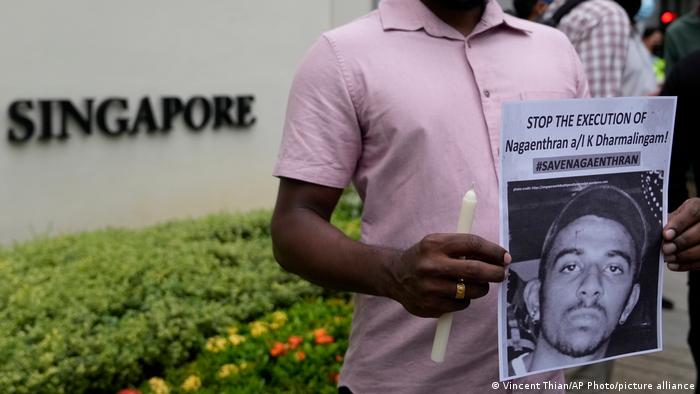 A Singapore court on Tuesday stayed the execution of a man believed to be mentally disabled after he contracted COVID-19.

Nagaenthran Dharmalingam, 33, convicted of drug smuggling was due to be hanged on Wednesday morning.

His execution was stayed until further notice, judge Andrew Phang told the court.

"We have got to use logic, common sense and humanity," he said.

The positive COVID test means a last-minute appeal hearing could not proceed.

What is Nagaenthran Dharmalingam convicted of?

Dharmalingam, a Malaysian national, was arrested in April 2009 for trafficking about 42.72 grams (1.5 ounces) of pure heroin.

Narcotics officers found a small bundle of heroin strapped to his left thigh at a checkpoint.

He was sentenced to death in November 2010. Singapore has some of the world's toughest drugs laws.

An earlier appeal to commute the death penalty to life in prison failed and a petition for presidential clemency was rejected last year.

What have his supporters said?

His lawyers appealed against the execution arguing that capital punishment of a mentally disabled person was a violation of Singapore's Constitution.

Those calling for the suspension of Dharmalingam's death penalty said that his IQ was revealed to be 69 during a trial at the High Court — a level that is internationally recognized as an intellectual disability.

His supporters claim that his intellectual disability means he can't make rational decisions.

The Singapore High Court, however, ruled that Nagaenthran knew what he was doing and upheld the death sentence.

The execution, scheduled for Wednesday, was put on hold after a last-resort appeal was lodged, with the Court of Appeal. The case has attracted international attention. A group of UN human rights experts appealed to Singapore to halt the execution.

"We are seriously concerned that, if the appeal is dismissed, he could still be executed imminently," the experts said in a statement ahead of Tuesday's ruling.

Amnesty International, said the last-minute stay by the high court offered a "glimmer of hope."

"To meet international standards of fairness, an appeal process must not be rushed, but needs to serve as a meaningful opportunity to reconsider Nagaenthran's case," said Amnesty's Singapore researcher Rachel Chhoa-Howard.

Malaysian Prime Minister Ismail Sabri Yaakob had also written to his Singaporean counterpart seeking leniency for Nagaenthran "purely on humanitarian grounds," urging him to postpone the execution, according to reports.

A European Union delegation to Singapore, along with diplomatic missions from Norway and Switzerland, also urged the city-state to commute Nagaenthran's death penalty.

"Today, more than two-thirds of the countries of the world have become abolitionists in law or practice, which confirms a global trend in favor of the abolition of the death penalty," they said in a statement.