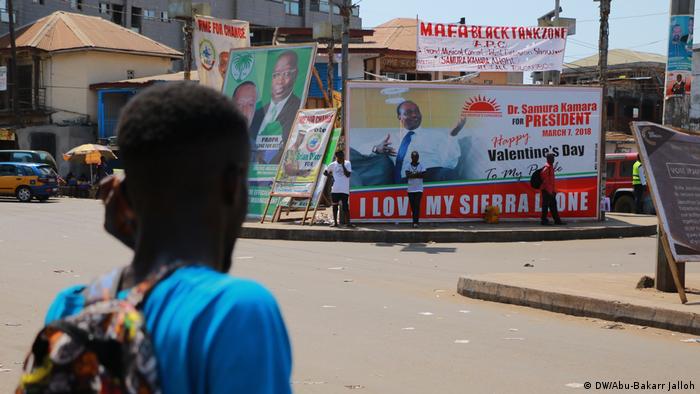 Sierra Leone will hold a presidential runoff vote on March 27, the electoral commission said on Tuesday.

Julius Maada Bio, leader of the opposition People's Party, picked up 43.3 percent of votes in the March 7 election, while Samura Kamara of the All Peoples Congress (APC) won 42.7 percent, the commission said.

Read more: Sierra Leone: Voting for change or more of the same?

Under electoral rules, the vote goes to a runoff if no candidate garners the 55 percent needed to win the first round.

Sierra Leone goes to the polls

Sierra Leone heads to the polls

President Ernest Bai Koroma is stepping down after serving a maximum of two five-year terms in office. He had tapped former foreign minister Kamara, 76, to run for APC against 53-year-old Bio, a former junta leader.

The two parties have dominated politics in Sierra Leone since the West African country became independent from Britain in 1961.

A total of 16 candidates ran in the presidential polls on March 7. European Union observers described the vote as generally "transparent, credible and well-organized," but noted there had been concerns about "intimidation and violence" in some areas.

Whoever is ultimately declared president faces a number of significant challenges. The economy of the poverty-stricken country is in a poor state following a commodity price slump and an ebola epidemic that killed thousands of people.

Sierra Leone has begun Thursday mass burials of the hundreds of victims of the deadly flooding and mudslides that hit Freetown. A third of the victims were children. Red Cross has said about 600 are still missing. (17.08.2017)