At a retrospective exhibition of works by artist Amedeo Modigliani in Bonn, at least one of the paintings is said to be fake. The case is under investigation. Art expert Henrik Hanstein tells DW why he's not surprised. 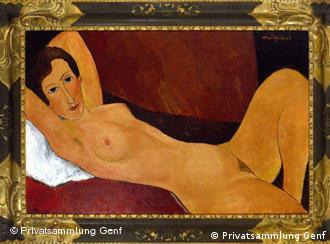 Henrik Hanstein is managing partner of Kunsthaus Lempertz in Cologne. Founded in 1845, it is one of the leading art auction houses in Europe.

Deutsche Welle: Mr. Hanstein, in general there are said to be three fake Modiglianis around for every real one. Why is it with Modigliani paintings particularly difficult to distinguish between an original and a copy?

Henrik Hanstein: This has to do with Modigliani himself, who certainly didn't live the kind of orderly life that every art cataloger hopes for - he didn't register or photograph every painting. Modigliani's estate was scattered very quickly in all directions and it quickly became a kind of Bohemian myth and, thus, an easy target for imitators.

To sort this out, five divergent and contradictory catalogues have in the meantime attempted to organize his works. I don't know of anything similar in art history. It's unique. And, that makes it really difficult for a museum to put on an exhibition.

Can anyone say for sure whether the disputed paintings are originals or fakes?

Difficult question: At the moment, there are two experts who consider themselves to be the authorities, including Professor Christian Parisot in Paris and Rome, who received archive documents from Modigliani's daughter and because of that has a kind of competitive advantage. The second expert also lives in Paris. Both have their qualifications, but when I survey the market, both also have large weaknesses.

That's why it's so difficult to say, 'I know or I don't' - that is, unless they have a painting whose provenance they can prove very reliably over many years and have early documents showing its origin.

At Kunsthaus Lempertz, what do you do when you are offered a Modigliani?

We recently had an interesting case of a painting that was offered to us from the United States and then lay around for seven years, but none of us liked it, so we didn't want to include it in the auction.

Technically, stylistically, it provenance hadn't really been confirmed, it wasn't verifiable in any of the catalogues and in such cases you have to be extremely careful.

We said we didn't want it, but the collector didn't come to pick it up and also didn't pay the fee for storing it with us, so we gave him a deadline. It was then promptly picked up by Christian Parisot, who wanted to examine it carefully in Rome. Before we gave it to him, we also brought in a restorer, and, after closer inspection, it became apparent that the signature was on top of the varnish, which is a clear indication of a fake. Also, the canvas was machine-woven and couldn't have existed between 1915 and 1917. So, on technical grounds, we said, no, that's not one.

But then while in an Italian restaurant ordering a pizza I read by chance in the newspaper Corriera della Sera about a painting that had been missing in private ownership for a long time and then put on display for the first time in Italy. It was billed as a big discovery. And I couldn't believe my eyes. I looked in my small camera that I had with me. It was "our" painting! That really took my breath away.

So, one has to work almost in a forensic manner. There's really no more difficult case than Modigliani. There are paintings hanging at the Bonn exhibition that aren't from him. That's not being kept secret. I don't think the state attorney's office would be able to solve it.

How should the Bonn museum - the Art and Exhibition Hall of the Federal Republic of Germany - react?

It shouldn't react at all. The state attorney will ask where is the authoritative expert? But it won't get an answer. That's an exhibition that doesn't claim to be flawless. When they go through the exhibition and keep their eyes open, they'll see that the quality of the paintings varies greatly.

But the attempt, after decades, to put together a retrospective, is respectable nevertheless.

From the beginning it was clear that, with Modigliani, you'll could run into a trap.

That was a painting in the exhibition that didn't appeal to me. That applied also to curators. And, when it was advertised by code in the newspaper - in the Frankfurt Allgemeine, I think - then the suspicion became firmer. I found it rather disconcerting. I don't know the background. Here, it's possible that the museum has been used as a means to an end.

A German museum has refused to return a valuable collection of vases to its Jewish owners, reviving troublesome questions over the restitution of Holocaust art. (03.06.2009)

Munich gets a new art museum

Berlin now has one of the world’s most exciting urban art scenes, and a new IT application is making it accessible in a whole new way: digitally. (17.05.2009)