Sharp decline in smoking rate among German teens | Germany | News and in-depth reporting from Berlin and beyond | DW | 10.02.2012

German teens are smoking at sharply lower rates now compared to 10 years ago, while binge drinking appears to be on the rise among young adults, a government study finds. 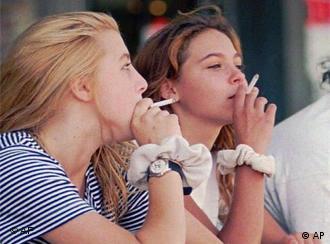 The percentage of German minors who smoke has dropped by more than half in the last decade, while binge drinking among young adults is on the rise, the Federal Center for Health Education reported Friday.

The agency said 11.7 percent of Germans aged 12 to 17 admitted to smoking cigarettes in 2011, down from 27.5 percent in 2001. The data was based on surveys of around 5,000 youths and young adults conducted last year on their drug habits. 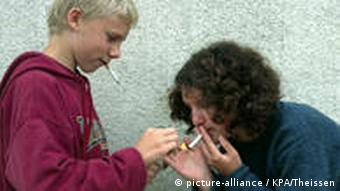 The government drug commissioner, Mechthild Dyckmans, praised the results of the study, calling it "a sign that the numerous prevention efforts are working."

She also expressed concern over the increase in apparent binge drinking among young adults. Some 42 percent of Germans between 18 and 25 said they had consumed at least five drinks on one occasion in the last month, up from 37.9 percent in 2009.

Cannabis consumption among 12- to 17-year-olds dropped to 6.7 percent from its highest recorded level of 15.1 percent in 2004. The drop among the young adult demographic in the same time span was much less dramatic, from 43 percent down to 39.2 percent.

Enforcement of smoking laws is relatively lax in Germany, where tobacco companies are allowed to give away free cigarettes in public and regional smoking bans in bars are not comprehensive and often ignored.

The southern state of Bavaria passed a referendum in 2010 establishing the country's strictest smoking ban. The government of the western state of North Rhine-Westphalia, Germany's most populous state, plans on strengthening its smoking ban this summer by eliminating exemptions for party tents and "smokers' clubs," an on-paper distinction from a bar or restaurant.