The ancient order of the Shaolin fighting monks have a new home in the German capital after the largest Shaolin Buddhist temple outside China opened in Berlin on Thursday. 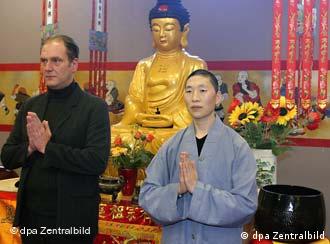 The entrance is guarded by two golden lions, similar to the type which adorn the doorway to many a Western Chinese restaurant.

But apart from the gleaming representations of the king of beasts at the front, the building does not draw much attention to itself. However, the simple brick construction in Berlin is the biggest Shaolin temple outside China.

Shaolin is a school of Buddhism, founded in the middle of the first millenneum in the Henan province of China. Over time, the form of kung fu practiced there became famous all over China and later, the world. 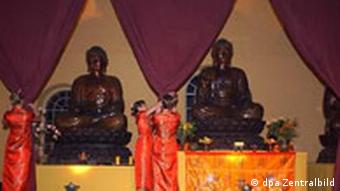 Women opened the curtains in front of Buddha figures at Berlin's new Shaolin temple on Thursday.

The new temple in Berlin, officially opened on Thursday evening with celebrities and stars in attendance, is the next step for the ancient order of fighting monks as they attempt to establish more houses of worship in Germany.

Labor of love for German Buddhist

The construction of the temple is down to the dedication of a German, Deller Lehner. Lehner came alone to the Shaolin Temple in the Songshan Mountain in central China's Henan province 13 years ago to learn martial arts. During his time there, he became a Buddhist.

In 2001, he established a Shaolin Temple in Berlin and invited monks to teach martial arts and Buddhism there. An expanding student populace, more than 600, quickly outgrew the facility. 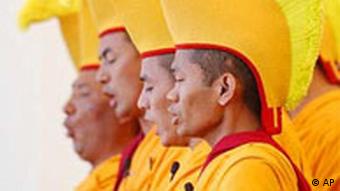 A team of 12 Chinese monks and ten employees will run the temple and provide instruction in the martial arts and Chinese medicine. They will also officiate at the Buddhist ceremonies which will take place every Tuesday and Thursday at 5 p.m. and Saturday at 11 a.m.

The monks have dismissed comments that the temple has been set up as a money making enterprise, which they have rejected as another example of the superficial way Shaolin is perceived in western culture.

The monks hope to work with German intellectuals to plan cultural exchange programs and promote the understanding of their ancient order. China's central Shaolin temple, which is still in operation, dates from the year 495.

As the 100th anniversary of the founding of the first Buddhist congregation in Germany approaches, the Dalai Lama plans to visit the country. (May 28, 2003)

Increasing numbers of Germans are switching off their worries along with their mobile phones and immersing themselves in Buddha's teachings. (June 9, 2004)

In the extreme southeast of Europe lies Kalmykia, a republic of Russia. Mostly Buddhists live here. For the 4th part of our series "Extreme Places," we paid the region a visit.