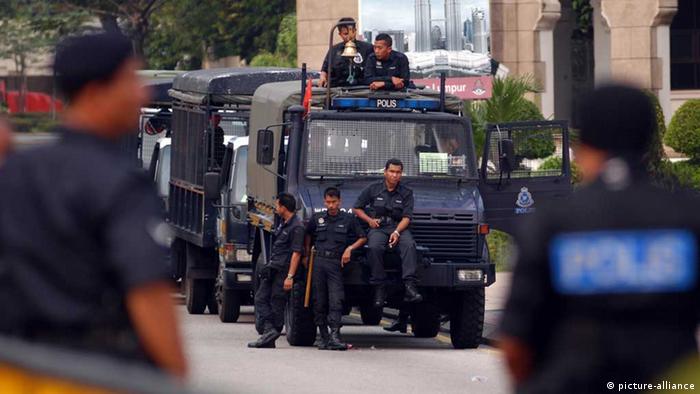 Malaysia's police chief, Khalid Abu Bakar, said on Monday that of the 17 people arrested on Sunday, two had just returned from Syria.

"[They] were planning terror activities in Kuala Lumpur. Two of them had recently returned from Syria," he tweeted. He didn't give any more details, but said there would be a statement later on Monday.

The Malaysian government has been increasingly worried about growing support for the Islamist group "Islamic State" or "IS."

The detentions come just days after the Interior Ministry introduced its "Prevention of Terrorism Act" bill, which would see the reintroduction of indefinite detention without trial and allow the seizure of passports of anyone suspected of supporting terrorist acts.

A similar, controversial law was repealed in 2012, and critics say the proposed laws would curtail civil liberties.

In January, 120 people with suspected links to "IS" were detained as they tried to travel to Syria or Iraq. Police also said that 67 Malaysians were known at the time to have gone abroad to join "IS" and that five had died fighting for the militant group.

A helicopter crash in Malaysia has killed six people including two high-ranking government officials. Both were close associates of Prime Minister Najib Razak. (05.04.2015)

A Malaysian cartoonist faces more than 40 years in prison after being charged with several counts of sedition. Known as Zunar, he has appealed for support in what he's called a politically motivated case. (03.04.2015)