Police in the Serbian capital, Belgrade, have disarmed a man with two hand grenades who had threatened to blow himself up in front of the president's office. 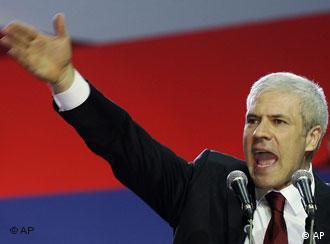 "The grenade has been safely taken away from him after five hours of negotiations," a police spokeswoman said on Thursday.

The offender, a 57-year-old bankrupt businessman, had pulled out the safety pin on at least one of the grenades and had threatened to detonate the device if an old court case was not settled in his favor.

President Boris Tadic's office said the president had entered the building after the standoff began, and had apparently taken part in negotiations between the man and SWAT teams dealing with the situation.

Police said the man was seated with his hand grenades in a small lobby at a side entrance, surrounded by policemen pointing guns at him, while negotiators tried to persuade him to surrender.

The man is said to have announced his intentions in 11,000 e-mails sent to private and public institutions. He allegedly threatened to commit suicide because he had lost a case filed against the Serbian state airline, JAT. In that suit he had demanded millions of euros in compensation for unspecified damages.

Police said that five years ago the man had gone on an 80-day hunger strike in front of parliament to protest what he had felt was wrongful treatment by the judiciary.

US seeks better ties with Serbia

Learn from your history, Biden warns leaders during Balkan tour

US Vice President Joe Biden warned Bosnia and the wider Balkan community to fight against a return to the ethnic violence which plunged the region into war before continuing his tour with a visit to Serbia. (20.05.2009)

Ten police officers were injured in street clashes with Serbs living in eastern Kosovo. The protestors, who had refused to pay electricity bills, were reportedly angry that their power had been cut. (11.05.2009)