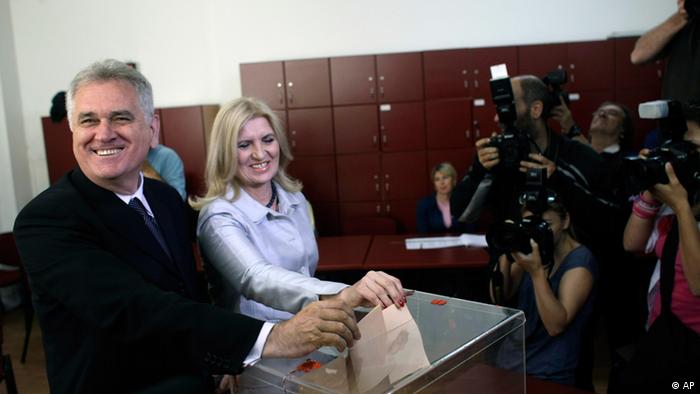 Nikolic led with 49.4 percent in 70 percent of the polling stations surveyed while Tadic obtained 47.4 percent.

Tadic conceded defeat, congratulating Nikolic on "a fair and well-earned victory." He urged him to continue leading Serbia into Europe.

"Serbia will not turn away from the European path," Nikolic vowed. "These elections were not about who will take Serbia to the EU, but who will solve the economic problems created by the Democratic Party," he claimed.

Many of the 6.7 million eligible voters shunned the polling stations, with turnout at just under 37 percent two hours before they shut at 8 p.m. local time. Observers say this could have benefited Nikolic, because his voters were more likely to go and cast their votes. 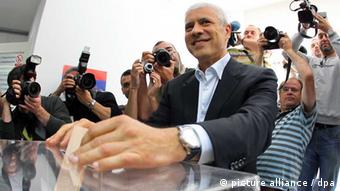 Surveys published ahead of the run-off vote had showed Tadic leading with 58 percent of the vote compared to Nikolic's 42 percent.

In the first round of voting on May 6, the incumbent president also polled slightly ahead of Nikolic, a one-time ally of the late Serbian strongman Slobodan Milosevic. The result led the nationalists to accuse Tadic of fraud, spurning fears of possible violence after Sunday's run-off vote. Serbia's state prosecutor and electoral officials have dismissed the charge.

On course for Europe

The outcome of Sunday's presidential election is widely considered integral to Serbia's hopes of becoming a member of the European Union.

Tadic, leader of the Democratic Party (DS), who led Serbia in securing EU candidacy status in March, has pledged to remain dedicated to European integration and economic development if re-elected.

Although Nikolic has warned in the past that EU membership must not come at any cost, he said on Sunday that the country, if led by him, "will not stray from its European path."

He has also pushed for closer ties with Russia, accusing Tadic of only seeking cooperation with the EU and United States. "I support a two-door policy, both towards the East and the West," he said in a heated TV debate with Tadic last week.