Serbian police have arrested a man suspected of killing Muslims during the Bosnian war in the 1990s as Belgrade tries to fulfill the conditions of EU membership. 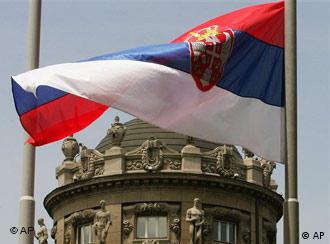 Serbia is making an effort to find suspected war criminals

The Serbian war crimes prosecutor's office said on Sunday it had apprehended a war crimes suspect, Darko Jankovic, wanted for killing at least 19 Muslims during the 1992-95 Bosnian war.

"[Jankovic has] been wanted for a long time," said Bruno Vekaric, a spokesman for the prosecutor's office, in a statement to the B92 television station. "His name is linked to several crimes mainly in the cultural center at Celopek where 19 people were killed."

Celopek is located in eastern Bosnia, near the town of Zvornik.

The Serbian government said the arrest illustrated its resolve to prosecute war criminals as it seeks European Union membership.

Serbia has yet to locate and arrest Ratko Mladic and Goran Hadzic, the highest profile fugitive war crimes suspects wanted by the United Nations Tribunal for Former Yugoslavia. Their apprehension is seen as a condition for admitting Serbia to the EU.

War crimes suspect Radovan Karadzic continues to boycott his trial in the Hague. However, the former Bosnian Serb leader says he'll appear at a hearing on Tuesday to discuss how to proceed with the process. (02.11.2009)

The former Bosnian Serb president, Biljana Plavsic, has been released on parole after serving two-thirds of her 11-year sentence for war crimes. (27.10.2009)

Serbia remains determined to join the European Union. And some of its neighbors agree that membership could help stabilize the region. (13.10.2009)