Security Worries After Schröder Slapping Incident | Germany| News and in-depth reporting from Berlin and beyond | DW | 20.05.2004

Chancellor Schröder is worried about what might have happened had the man who slapped him at a party rally on Tuesday been armed with more than an outstretched hand. Authorities have pressed charges against the man. 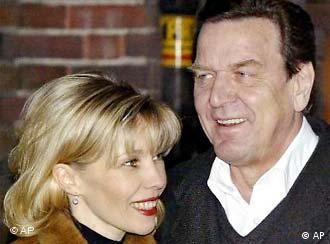 The incident unsettled Schröder, pictured here with his wife.

Schröder recovered quickly from Tuesday's incident. After being slapped in the face by a 52-year old unemployed teacher, Schröder carried on signing autographs for new members of his Social Democrat party, and gave his speech without referring to the attack. But according to Schröder's spokesman, Bela Anda, the incident shook the normally composed chancellor.

"The question which was posed by the chancellor himself was, if that was possible, what else could have been possible?" said Anda. "It's a question I can't answer. But these are obviously questions that one asks."

Anda said Schröder has no plans to tighten security measures, but he condemned the attack and said it should be a warning to Schröder's political foes to weigh their words carefully. "It has to be made clear where the border is and the border has obviously been crossed when the chancellor is physically attacked," Anda said. "The lesson to be learned is, everyone should keep in mind what impact verbal aggression can have."

Germany's foreign minister, Joschka Fischer, checked in with Schröder shortly after the incident to see how his friend and close political ally was faring. Fischer has also been on the receiving end of such attacks -- in 1999, a paint bomb aimed at his head caused damage to his eardrum. Fischer called on security personnel to prevent such incidents, but said such things can always happen, no matter how tight security precautions are.

Police in Mannheim, where the incident occurred, released Schröder's attacker on Tuesday shortly after he was arrested. A police spokesman said they had no grounds to hold the man, and that despite questioning, he refused to comment on his motive.

Although Schröder was not injured, his office filed a criminal compalint against the man. On Thursday, the public prosecutor's office in Mannheim began preliminary proceedings against him, charging him with intention to commit bodily injury and insulting a public figure. If found guilty, he could face either a fine or a prison sentence of up to a year. A spokeswoman from the prosecutor's office said a decision in the case could be made as early as next week.