Men armed with machetes have hacked Bangladeshi blogger Niloy Neel to death in Dhaka. This is the fourth such killing of a secular online activist in Bangladesh since the beginning of this year. 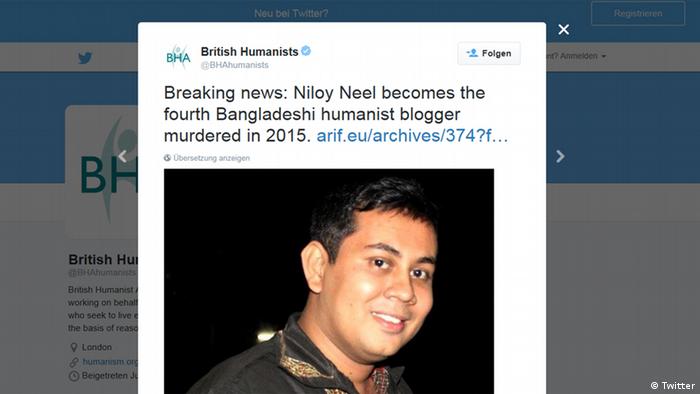 Niloy Neel, also known as Niloy Chowdhury, was murdered in his apartment in Bangladesh's capital on Friday.

"They entered his room in the fifth floor and shoved his friend aside and then hacked him (Neel) to death. He was a listed target of the Islamist militants," Imran H. Sarker, head of Bangladesh Blogger and Activist Network told journalists. Sarker also tweeted the news.

The 40-year-old Neel lived in the apartment with his family. His assailants had entered the building posing as potential tenants, Sarker added.

Police confirmed the activist's death, but did not have any more details at the moment.

Neel was a secular blogger and often wrote for the platform "Ganajagaran Mancha" demanding capital punishment for 1971 war criminals.

Asif Mohiuddin, a recipient of DW's The Bobs award for online activism and himself a victim of a past attack, wrote:

Niloy Neel's death follows three such murders earlier this year. On February 26, machete-wielding religious fundamentalists hacked US-Bangladeshi blogger Avijit Roy to death. He was promoting his book "The Virus of Faith" in Dhaka.

On March 30, another blogger, Washiqur Rahman was killed for being openly critical of religious hardliners. On May 12, 31-year-old Ananta Bijoy Das was murdered.

The slain bloggers' names have featured on a "hit list" of 84 people that has been allegedly circulating in the internet since 2013.