A high school in the German city of Bonn has suspended two Muslim girls for wearing a burka, an all-enveloping cloak worn by women in central and south Asia. 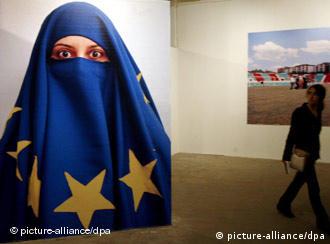 The two teenagers who returned to school following the Easter holidays dressed in burkas were considered to have disturbed the peaceful running of the school and were handed initial suspensions of two weeks, a school official said.

The Muslim council of Germany too has criticized the schoolgirls' decision to attend school in burkas. It said it was necessary for teachers to have eye contact with pupils in classes.

August Gmünd from the local government, which supports

the suspension, said the action had caused disruption throughout the school.

“A heated discussion broke out in the school the instant the two girls turned up, not just amongst the kids, but also the teachers," said Gmünd. "It was just impossible to maintain a controlled environment in the school.”

The girls have been suspended from school for two weeks, for disrupting lessons. Officials say they are welcome to return to school, if they shed their all-enveloping garb. At the school playground, the appearance of the covered girls confused and annoyed pupils.

“One of the girls was in class with me," said a student. "I find it very strange: before the Easter holidays, she was personable and outgoing. Now, after the holidays, she turns up in a Burka.”

Ulrich Stahnke, head master at the school in Tannenbusch on the outskirts of Bonn, said he spent days considering whether to suspend the girls. He added he and his colleagues had tried to convince them to discard their Burkas, without success. 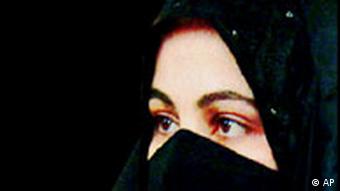 “For me, this is a new development in Central Europe, which one is either aware of, or consciously brings into school as a provocation," Stahnke said. "Or, one takes a religious angle with it, which, in a very specific way, has a fundamentalist character.”

The two girls have cited freedom of religion in defense of their outfits. Their families have hired a lawyer, who has yet to issue a statement.

Even those who wear headscarves at the school have little empathy for the girls. One pupil of Kurdish origin, is now campaigning for a completely headscarf free school.

“Class 11 and 12 have put together a petition with signatures from classmates who frown on their decision," she said. "We also have the full support of the school board. We think it’s out of order to show up at school like this. As a Kurd, and a woman, I feel it’s my responsibility to show that this isn’t on, and that it symbolizes female oppression.” 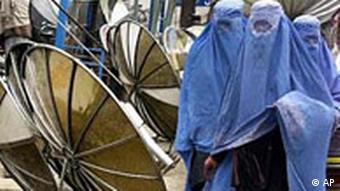 Afghanistan's Taliban regime, which was overthrown by U.S.-led forces in late 2001, introduced a law making it

compulsory for all women to wear the garments.

For head master Stahnke, the girls are harming the school’s integration policy. Around 30 percent of pupils either come from migrant families, or are themselves migrants. Stahnke said the school ‘wants to show these children that they can follow their religion without wearing Burkas’. He now hopes the girls will participate in counseling sessions with a theological expert, and reconsider their decision.

The case follows moves by France, home to Europe's largest Islamic minority, to ban Islamic headscarves and other "conspicuous religious signs" in state schools in 2004. The measures is aimed at stemming what it said was the rising influence of radical Islamists among youths.

Germans in a small East Berlin neighborhood are protesting plans to build a mosque there. They'd prefer their small garden plots to a minaret on the skyline. (April 19, 2006)

The so-called honor killing of 23-year-old Hatan Sürücü by her brother Ayhan and his subsequent trial and conviction have plunged Germany further into a volatile debate regarding the integration of Muslim immigrants. (April 17, 2006)