Christoph Schlingensief's controversial rendition of "Parsifal" concluded the first round of the program at the Wagner Festival Wednesday in what may be the most daring production to come from Bayreuth. 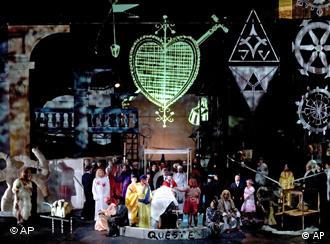 The 45-year-old German director was met with boos, but also applause when he appeared on stage after the performance. His Parsifal rendition premiered at the festival in 2004 and has remained contentious since then.

Known for politicizing his theatrical works, Schlingensief focused on the conflict between Christianity and Islam with a set rich in religious symbolism. He presented Kundry (Evelyn Herlitzius), a helper to the knight searching for the Holy Grail, as a fundamentalist Islamic fighter clad in black.

"It may be a lot to expect of the people in the expensive seats," the avant-garde producer said about his first opera in an interview with German news agency dpa Thursday, "but I have reconciled Nietzsche with Wagner by negating Wagner's silly Buddhist dream." 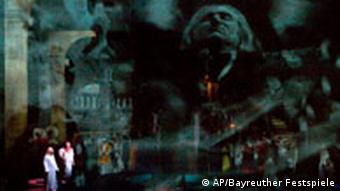 Alfons Eberz is Parsifal, left, and Robert Holl is Gurnemanz

A biography of the producer that appears on his personal Web site describes him as "a moralist with messages of an almost biblical tone" who "creates a permanent state of insecurity by blurring borders between reality and fiction, art and offense, intention and action."

In the interview, Schlingensief added that, despite any controversy and "insecurity" that may have arisen, the festival heads had given his production "a high artistic rating," which "wouldn't have been possible after the premiere in 2004." Then again, he has thoroughly reworked the opera since then.

Parsifal was the self-proclaimed Wagner fan's first opera production. He said he now finds opera more exciting than theater and doesn't exclude the possibility of returning to Bayreuth for another project in the future.

Once again, applause for musical excellence

Hungarian-born conductor Adam Fischer, who conducted The Ring in Bayreuth from 2001 to 2004, was praised by critics for a "precise," even "consecrated" performance, though he may have "lacked tension" at times.

As in The Ring, both the conductor and the singers came away with high marks. Only the two producers -- Schlingensief and Tankred Dorst -- have ruffled feathers and polarized critics.

It is speculated that Wagner created a word play by changing the spelling of the epic: "Parsi" is similar to the Persian word for "Persian" and "fal" is close to the German and English word "fall," thus alluding to a "fall of the Persians."

Competition strategies for the future 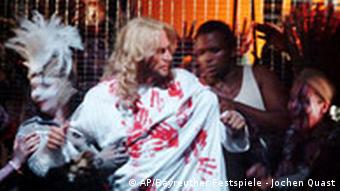 Schlingensief made a few revisions since the 2004 version shown here

This Parsifal rendition is certainly the most unusual production ever to be performed in Bayreuth, wrote news agency dpa Thursday. Other opera companies also perform Wagner and, in spite of the advantage of having a long tradition, the Bayreuth Festival has to remain competitive.

Shortened runtimes for new productions should also add to the festival's competitive edge by allowing for a greater sense of novelty in the program. Parsifal will be remade in 2008, but it is unclear who will be entrusted with the production.

The next fresh addition to look forward to is Katharina Wagner's production of The Mastersingers of Nuremberg, planned to premiere in 2007. She is the daughter of the current festival director, 86-year-old Wolfgang Wagner, and Richard Wagner's great-granddaughter. Katharina's Bayreuth debut will be closely observed, as she is likely to succeed her father in running the festival.

Wednesday's performance of Parsifal concluded the first round of operas at this year's Wagner Festival. The Ring, The Flying Dutchman, Tristan and Isolde and Parsifal will be repeated in a total of 22 more performances until the festival ends on August 28.

The first "Ring" cycle concluded Monday to mixed reviews and a polarized audience. Most agree, however, that conductor Christian Thielemann and the singers saved the underdeveloped production. (Aug. 2, 2006)

Culture researcher Andreas Wiesand talked with DW-WORLD.DE about the Wagner family "soap opera" and said that Germany's arts subsidies are deeply rooted in history so the general public doesn't question them. (July 27, 2006)