Schlecker drugstores to close for good | Business | Economy and finance news from a German perspective | DW | 04.06.2012

Schlecker drugstores to close for good

Attempts to rescue the bankrupt drugstore chain Schlecker, once Europe's largest, have failed. The remaining 3200 stores will close, and the last 13,200 employees will lose their jobs. 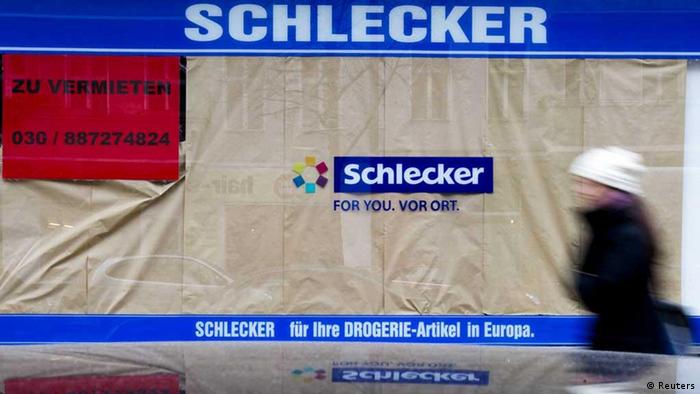 When the deadline passed on Friday (June 1) there were no offers from potential investors ready to be signed. Meeting in Berlin, the creditors gave the thumbs-down: the bankrupt drugstore chain will close.

Originally, administrator Arndt Geiwitz wanted to present a solution by the previous Friday. But because even then, no "suitable offers" were received by investors, the creditors extended the deadline until this Friday. After examining the situation, Geiwitz could see "no prospects for the economically viable continuation of Schlecker or sale of the entire group to an investor."

The closure of Schlecker will begin this month, Geiwitz said. In July, the remaining workforce will be let go. Some 13.200 employees are affected, most of whom are women. Even their offer to take a pay cut of about ten percent of their wages could not stop the plug from being pulled on Schlecker. "The Schlecker women have shown that they are willing to make a great personal sacrifice to save their jobs," Stefanie Nutzenberger, a board member of the service sector union Verdi, said on Wednesday.

Arndt Geiwitz had previously demanded a wage cut of 15 percent. He had also made it clear that as administrator he could not allow Schlecker, with its remaining 3,200 stores, to make losses indefinitely. For the current year, Geiwitz expects a loss of 25 million euros for Schlecker; in 2011, it was 200 million euros.

From market leader to bankruptcy 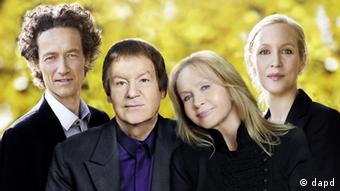 The Schlecker drugstore chain was founded in 1975 by Anton Schlecker in Ehingen in southern Germany. Later the company expanded abroad. In 2008 it had around 14,000 branches, 50,000 employees and annual sales of more than seven billion euros, making it the largest drugstore chain in Europe. In early 2010 the company announced it would have to close 500 stores because of "business problems." In January 2012, Schlecker finally had to file for bankruptcy.

As part of the reorganization, administrator Geiwitz closed about 2,000 branches in Germany at the end of March and fired more than 10,000 employees. Almost half of those dismissed contested the action.

Sources close to the administration process say these dismissal complaints made the search to find a buyer for the entire company more difficult. After several interested parties pulled out, Geiwitz was down to negotiating with two investors. He would not name names, but it is considered certain that they were the German-American billionaire Nicolas Berggruen and the New York investment firm Cerberus Capital Management. Nicolas Berggruen Holdings, which took over the insolvent German department store chain Karstadt in 2010, confirmed it had been in contact with the Schlecker administrator.

No agreement with investors 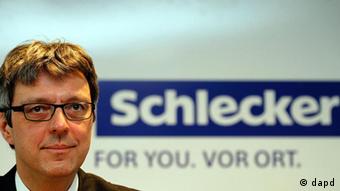 Even at the end, creditors and investors apparently were not able to agree on an offer. While the lack of a workable concept was the sticking point, the sums didn't add up, a spokesman for the world's largest credit insurer Euler Hermes said on Wednesday. The Allianz subsidiary has secured deliveries of goods to Schlecker totaling 300 million euros and is the drugstore chain's largest creditor.

According to the magazine "Manager Magazin" and the "Stuttgarter Zeitung" newspaper, Nicolas Berggruen offered between 100 and 150 million euros for the entire Schlecker group, including real estate and inventory. Euler Hermes would have had to give up a large part of its claims under these conditions.

No help from politicians

The negotiations with investors ran better outside Germany. In France, the retailers' cooperative Systeme U will take over the Schlecker SNC subsidiary with 139 stores and 750 employees, the receivership said on Wednesday. Before that, the chain in the Czech Republic had been sold.

To give the administrator more time to search for investors, the trade union Verdi had called for help from the government. It proposed the Federal Labor Office should pay two months' salary for the employees. The 'no' from Berlin arrived promptly. It did not come directly from a senior politician, but from a member of parliament, Lars Lindemann, of the free-market Free Democratic Party (FDP), the party of Economy Minister Philipp Rösler.

There was no entitlement to special benefits, he said. "Schlecker is not a key industry in Germany and has no strategic importance that would cause an industry to collapse." The attempt by the German states to take on a loan guarantee in late March failed due to resistance from the FDP.

The federal government is looking for solutions to the lack of professionals in Germany. Mathematicians, scientists and computer specialists are among the groups most needed. (04.06.2012)

German carmaker Volkswagen has announced a shake-up to boost its presence on the Chinese market. The decision follows BMW’s opening of a new production facility in the country. (02.06.2012)

Deutsche Bank CEO Josef Ackerman has handed over the reigns at Germany's biggest bank after a decade of both controversy and success. But tougher times lie ahead for his successors, he thinks. (31.05.2012)