Former German Interior Minister Otto Schily has accepted political responsibility for a series of neo-Nazi murders committed while he was in office. However, he denied having personally made any mistakes in the affair. 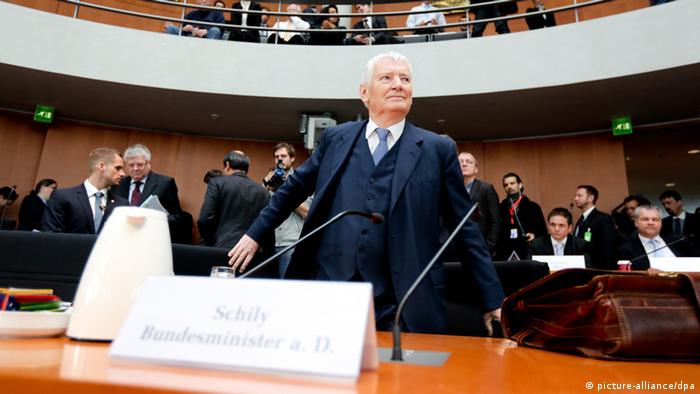 In his appearance before a parliamentary inquiry on Friday, Schily said he was deeply troubled by the fact that investigators had failed to uncover the neo-Nazi group's plans in time to prevent the murders.

"That the security authorities were unable to beat the gang of murderers to the punch and prevent their crimes is a highly shocking and depressing circumstance," Schily said. "You cannot imagine how heavily this weighs upon me."

The former Social Democrat minister said he accepted the political responsibility for the nine murders of immigrant small businessmen and a policewoman while he was in office.

At the same time though, he denied that he had failed to give enough attention to the threat of extreme-right terrorism during his time in office, from 1998 to 2005.

Schily said that, as interior minister, he had acted to the best of his ability based upon the information passed on to him by the investigating authorities.

Particular focus was placed on a 2004 bombing in the western city of Cologne, in which several people of Turkish origin sustained serious injuries. Schily rejected an accusation from a liberal Free Democrat parliamentarian that, as interior minister, he had ruled out the possibility that the attack had been of a racist nature.

However, the chairman of the Bundestag committee, who, like Schily is a Social Democrat, came to the former interior minister's defense. Sebastian Edathy produced a quote from Schily from the time of the attack, when he cited investigators who had told him that there were early indications that the bombing was of a criminal, rather than of a racist nature. Edathy stressed that Schily had also noted that the investigation was still ongoing at the time.

The now 80-year-old Schily though, was foggy on the details of the case.

"I have insufficient concrete memory of the whole process," Schily said, when asked why he did not follow up on suspicions voiced by the families of some of the victims that the attacks were of a racist nature. Speaking about the Cologne attack, he said he could not remember from whom he got the information indicating that there was no racial motive.

Trial to begin in April

The parliamentary committee is looking into 10 murders committed between 2000 and 2007. Eight of the victims were of Turkish origin.

Munich's Higher Regional Court is scheduled to begin the trial of 38-year-old Beate Zschäpe and four other suspects on charges including complicity in the anti-foreigner murders on April 17.

It was not until last year that German police and intelligence agencies conceded that they had failed to link the far-right suspects to the murder series.

The renewed scrutiny of the murder series had followed the discovery in November 2011 of two other dead members of the self-styled National Socialist Underground (NSU) after their apparent murder-suicide in the eastern city of Zwickau.