Once, Felix Magath was just another morose, middle-aged Bundesliga coach, looking sad and aloof at the side of the pitch. Now he's a fully-wired, 21st century social networker. When will his peers follow suit? 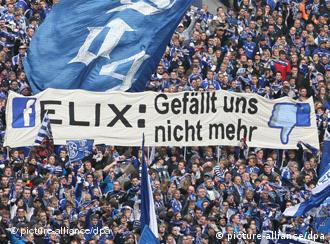 Some fans were unimpressed by Felix's foray into the social network

Not only has Felix Magath's Facebook page been a meteoric success – at the time of writing, the Schalke coach has 145,180 fans and counting – but thanks to the modern wonder of the Internet, his baby steps in the social network have been immortalized.

Among his first Facebook wall-posts, the Schalke coach offered a 46-second video of himself registering on the website. "Football!" he exclaims, by way of general introduction, "That's where everyone has a say. Where there's always something happening. There is always a lot of discussion."

He then looks at his monitor with all the enthusiasm of a horse staring at a bewilderingly fast river. "Facebook is something I would like to look at and participate in," he murmurs, not exactly exuding conviction. 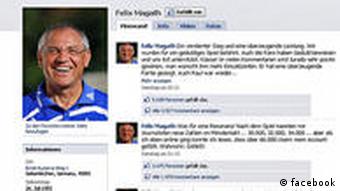 There then follows a dazzling montage of fast cuts as Magath types in his contact details, before he concludes with an invitation - "I'm looking forward to an invigorating exchange with you on my new account on Facebook," - and a truly priceless stony smile.

While the video gives the impression that Magath is being forced to log on at gunpoint – as part of a PR plot to break his joyless touchline image - it proved an instant hit. Around 4,300 people became Magath Facebook fans within 16 hours. There were 6,000 within a day.

As is usual with Internet trends, the numbers snowballed. Two and a half weeks since its debut, a thread of over 900 comments formed beneath the introductory video – a mixture of welcomes, helpful tips for the transfer market, and abuse from fans of rival clubs which descends into ill-tempered slanging matches. There is even the odd Sunday-league player pitching for a big break.

Magath has since posted a couple more videos, showcasing an odd mix of rambling philosophy, defiance towards critical fans and plenty of PR work of his own. There is much defense of underperforming players and his own emotion-free appearance at matches. "To believe that it leaves me cold, just because I sit on the bench relatively quietly – that's deceptive." 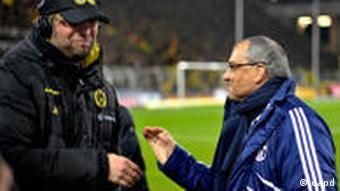 Rather admirably, he engages directly with fans' individual grievances. "The users have been preoccupied with set-pieces," he says in one post. "We are indeed lacking precision and goal-threat. Of course, we seriously miss someone like (injured Schalke defender - ed.) Christian Pander who would be responsible for taking dead balls."

But despite what has been an open and refreshing exchange so far, some fans – disappointed with Schalke's desperate season - have thrown the attempt at online communication back in Magath's face. After last weekend's 1-1 home draw with Nuremberg, a bed-sheet was unfurled by spectators displaying an image of the thumbs-up Facebook "Like" button turned upside down, along with the slogan, "Felix: We don't like him anymore."

But no other Bundesliga coach has taken to the new media with anything like the same vigor. Even Jürgen Klopp – the very definition of the young, dynamic, modern manager, whose stock is easily the highest among German coaches at the moment – only has a paltry 11,000 likes on his Facebook page, and he does not use his account to engage in discussion with the legions of Dortmund fans.

Twitter has become the more common modus operandi for the keen social networker in the world of professional sport - but even here, hardly any coaches have their own account. Klopp is one of them, but his account is little more than a ticker for the latest club news, and Magath's Twitter page turned out to be a fraud.

Indeed, most Facebook and Twitter accounts registered under the names of Bundesliga coaches seem to be inconsequential fakes or thinly disguised marketing tools for the respective clubs. This makes Magath's tentative foray into the lion's den of online forums all the more charming and even a little brave, no matter how clumsy his first steps may seem.

Schalke 04 pulled off a first-leg draw away at Valencia, and now head into their second-leg game with a real chance of progressing to the Champions League quarterfinals. (16.02.2011)

Getting a point against archrivals Dortmund has given Schalke's coach Felix Magath a bit of breathing room to pursue his plans for the team. The problem is, no one seems to know what they really are. (07.02.2011)

Schalke 04 joined Bayern Munich in the last 16 of the Champions League after a confident 3-0 win over Lyon which hinted at a long-awaited return to form. Meanwhile, Werder Bremen continue to plumb the depths of despair. (25.11.2010)