Six months ago, the young German physicist Jan Hendrik Schön seemed like the next best thing to Einstein. But then some of his colleagues took a closer look at his research and unraveled a scientific scandal. 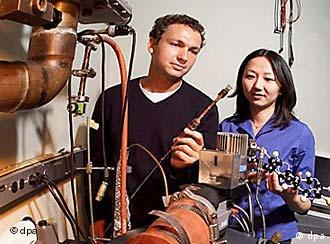 Two years ago an up-and-coming physicist from Germany named Jan Hendrik Schön burst onto the science scene with some revolutionary experimental results.

The 32-year-old academic, who was involved in researching nanotechnology at the prestigious Bell Labs in New Jersey, claimed he had succeeded in creating field-effect transistors out of tiny molecules that don’t ordinarily conduct electricity. These molecules, he reported, could be made to behave like semiconductors, the circuits that form the backbone of computers.

Schön’s work, published in renowned scientific journals like Science and Nature, was ground-breaking and quickly catapulted the physicist into the top tier of his field. Almost overnight he became a favored nominee for the Nobel prize.

The first experimental reports were quickly followed up by several more. Within two years time, Schön had published some 90 articles, most of them in leading scientific journals. Working under the feverish pace of the "publish or perish" climate of the scientific community, Schön quickly became a leading figure, something of a superstar among physicists.

"Breakthrough of the Year"

By 2001, Schön’s team at Bell Labs was reporting that they could turn nonconductors into semiconductors, lasers and light-absorbing devices. The implications of such breakthroughs for electronics were enormous, and there seemed to be no end to the possibilities for computing circuitry.

That same year Schön was awarded the prestigious scientific "Breakthrough of the Year" by his peers. He was set up to achieve monumental successes for the world of physics.

But then in April 2002, Schön’s star began to flicker. A small group of professors and researchers had begun taking a closer look at the wunderkind’s data. And what they noticed, didn’t quite add up to Nobel prize quality experiments. In fact, their investigations were showing that Schön manipulated his results to support his predictions: the worst possible criticism a scientist could face.

The questions started to arise when a few inquisitive researchers were unable to reproduce Schön’s results, despite numerous attempts in well-equipped laboratories.

Bell Labs then launched a full-scale independent investigation into Schön’s research. According to Malcolm Beasley, a professor of electrical engineering at Stanford University who oversaw the investigation, Schön had substituted figures from various papers, removed data points that disagreed with his predictions and used mathematical functions in place of real data points. In 16 of 24 cases, Schön’s data was found to be manipulated or falsified.

When asked about the questionable data in his reports, Schön acknowledged that he had made mistakes. "I have to admit I made various mistakes in my scientific work which I deeply regret," he said speaking to his scientific peers. "However, I would like to state that all the scientific publications that I prepared were based on experimental observations."

Unfortunately for the investigation committee, most of the evidence from the original experiments has vanished, making it difficult to prove whether or not Schön is actually telling the truth about what he claims to have observed. The transistors used in the original experiments are all broken and any attempts to replicate them have failed. Moreover, Schön himself says he deleted the raw data he originally gathered because his "computer lacked sufficient memory."

A few days later the German Max Planck Institute followed suit and canceled an offer of employment. Schön had been designated to head up a department for solid state research at the institute’s laboratories in Stuttgart, but when news broke about Schön’s faulty scientific methods, the German researchers wanted nothing more to do with him. "We’re not interested any more," said Klaus Irslinger, director of the Stuttgart branch of laboratories. "He has no more chances, that’s deadly for his carrier. He can’t even stand in front of a school class."

The scientific community, although quick to reject Schön from its ranks, will not be as quick to recover from the shock of enabling someone like Schön to rise so far and fast. When a researcher is able to publish at such a prolific rate with the near awe-struck reverence of the entire physics community and no one stops to question his experiments, it throws a negative light on the reputation of objective scientific inquiry.

The once "highly competent system of rigorous analysis and observation" doesn’t hold up any more under the numerous publications in the field, said Ingolf Ruge, director of Systems of Communication at the Fraunhofer Institute for Applied Science. Speaking in an official statement on the state of science, Ruge criticized the "neglect of ethics in the scientific community" and said that the sharp referee system of peer review prior to publishing was a "mess."

The entire experience of Schön has generated heated discussion on important questions such as peer review, scientific responsibility and career-motivated progression in science. "Hopefully people will learn something and move forward," Lydia Sohn said in this month’s issue of Nature.

Max Planck Society for the Advancement of Science